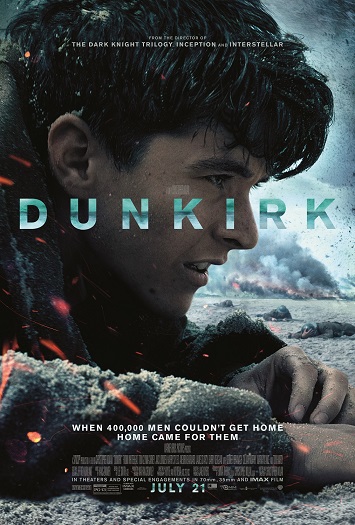 When 400,000 men couldn’t get home, home came for them. You and a guest are invited to a special IMAX advance screening of Dunkirk, Christopher Nolan’s grand scale World War II film that was shot entirely on large-format celluloid! Click here for a chance to download complimentary admit-two passes to the advance screening being held on Monday, July 17 at 7PM in Sandy, Utah! (While supplies last. Passes do not guarantee admission, as theater is overbooked to ensure that it fills. Arrive extra early for ticket exchange with the box office.) We’ll see you there!

Synopsis: From filmmaker Christopher Nolan (Interstellar, Inception, The Dark Knight trilogy) comes the epic action thriller Dunkirk. Dunkirk opens as hundreds of thousands of British and Allied troops are surrounded by enemy forces. Trapped on the beach with their backs to the sea, they face an impossible situation as the enemy closes in. The story unfolds on land, sea and air. RAF Spitfires engage the enemy in the skies above the Channel, trying to protect the defenseless men below. Meanwhile, hundreds of small boats manned by both military and civilians are mounting a desperate rescue effort, risking their lives in a race against time to save even a fraction of their army. Nolan directed Dunkirk from his own screenplay, utilizing a mixture of IMAX® and 65mm film to bring the story to the screen. The film was produced by Emma Thomas and Nolan, with Jake Myers serving as executive producer. #DUNKIRK in theaters July 21st.