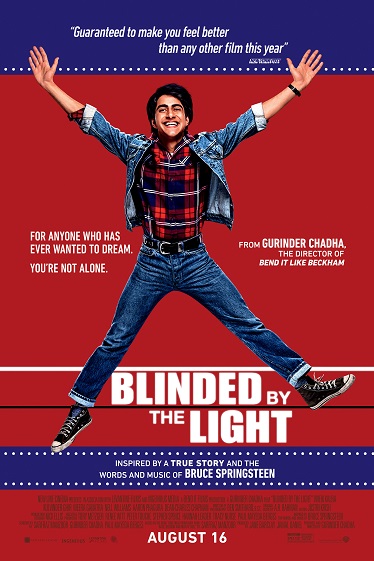 For anyone who has ever wanted to dream, you’re not alone. You and a guest are invited to a free advance screening of Blinded by the Light being held on Thursday, August 8 at 7pm in Salt Lake City. Click here to download your complimentary passes. (Passes admit up to two, while supplies last. Passes do not guarantee admission as theaters is overbooked. Arrive early to line up for the ticket exchange process!) Good luck!

Synopsis: From writer/director/producer Gurinder Chadha (Bend It Like Beckham) comes the inspirational drama Blinded by the Light, set to the music and lyrics of Bruce Springsteen’s timeless songs. Blinded by the Light tells the story of Javed (Viveik Kalra), a British teen of Pakistani descent growing up in the town of Luton, England in 1987. Amidst the racial and economic turmoil of the times, he writes poetry as a means to escape the intolerance of his hometown and the inflexibility of his traditional father. But when a classmate introduces him to the music of “the Boss,” Javed sees parallels to his working-class life in Springsteen’s powerful lyrics. As Javed discovers a cathartic outlet for his own pent-up dreams, he also begins to find the courage to express himself in his own unique voice. #BlindedByTheLightMovie in theaters August 16!