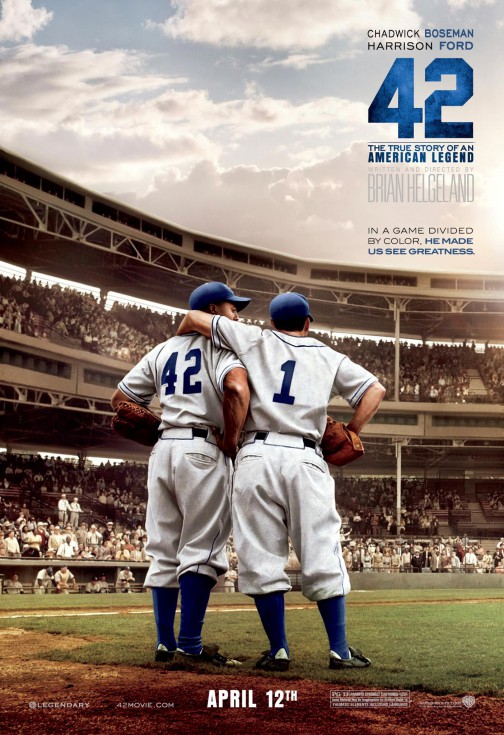 You and a guest are invited to a special advance screening of 42 taking place on Monday, April 8 at 7pm in Salt Lake City. Click here to download your complimentary passes. (Each pass admits 1. Limit 2 passes per person, while supplies last. Admission is not guaranteed. Seating is on a first come, first seated basis. Theater is overbooked, ARRIVE EARLY for ticket exchange starting at 4pm. Please leave your cell phones at home.)

Hero is a word we hear often in sports, but heroism is not always about achievements on the field of play. 42 tells the story of two men—the great Jackie Robinson and legendary Brooklyn Dodgers GM Branch Rickey—whose brave stand against prejudice forever changed the world by changing the game of baseball.

In 1946, Branch Rickey (Harrison Ford) put himself at the forefront of history when he signed Jackie Robinson (Chadwick Boseman) to the team, breaking Major League Baseball’s infamous color line. But the deal also put both Robinson and Rickey in the firing line of the public, the press and even other players. Facing unabashed racism from every side, Robinson was forced to demonstrate tremendous courage and restraint by not reacting in kind, knowing that any incident could destroy his and Rickey’s hopes. Instead, Number 42 let his talent on the field do the talking—ultimately winning over fans and his teammates, silencing his critics, and paving the way for others to follow.

In 1997, Major League Baseball retired the number 42 for all teams, making it the first number in sports to be universally retired. The only exception is April 15th—Jackie Robinson Day—commemorating the date of his first game as a Brooklyn Dodger. On that day alone, players from every team proudly wear Number 42 to honor the man who altered the course of history.