A sappy, unoriginal Love Actually rip-off. Made for tasteless teenagers who like Taylor Swift/Lautner and women who enjoy the corny sap of bad romance stories.

Rated PG-13 for some sexual material and brief partial nudity. 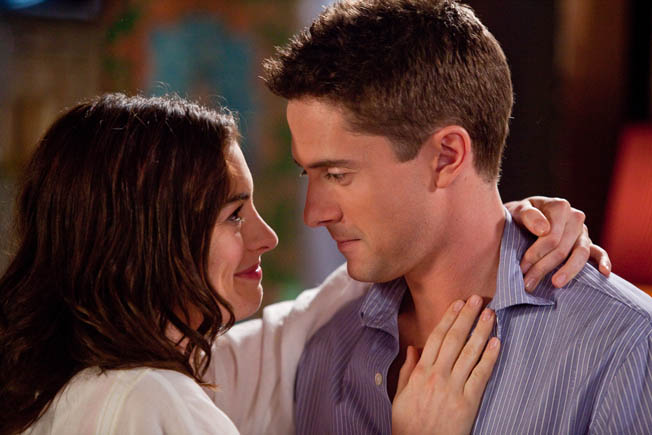 Stunt Casting (verb) – a Hollywood term meaning to cast a well-known popular actor in a tiny role or cameo just to be able to attach that actor’s name to a film.

Made up of several storylines following different couples and their relationships on February 14, Valentine’s Day is one giant example of ensemble stunt casting. With a principle cast of more than twenty actors, nearly every character is played by a popular actor or pop musician and is rarely featured more than fifteen or twenty minutes in the movie – a few of them only featured for a couple minutes. As you would assume, all of the different stories become interweaved as the stories progress.

Ashton Kutcher plays the owner of a floral company who proposes to his girlfriend (Jessica Alba) early Valentine’s morning. His best friends are George Lopez, an employee, and Jennifer Garner – who’s just started dating the perfect man (Patrick Dempsey). Bradley Cooper (The Hangover) is sitting on a 14-hour flight next to Julia Roberts, an active-duty captain in the Army who’s on leave for a short 8-hour stay in LA. Jessica Biel is a the agent for one of the NFL’s biggest star quarterbacks (Eric Dane, Grey’s Anatomy) who is about to become a free agent, Jamie Foxx is a local television sports anchor who is trying to get an exclusive interview. Emma Roberts (niece of Julia) plays a teenager giddy to lose her virginity to her boyfriend (Carter Jenkins, Aliens In The Attic) on this romantic day. Her best friends are the ditsy Taylor Swift and dumb-jock Taylor Lautner (Twilight) and she nannies a young motherless boy who wants to seize the day and finally tell some special girl that he loves her. He also has the help and encouragement from his grandparents played by Hector Elizondo (Monk) and Shirley MacLaine. Topher Grace (Spider-man 3) plays a really good guy dating a beautiful girl (Anne Hathaway) with a dirty little secret. Kathy Bates and Queen Latifah also play small, insignificant roles.

If you’ve seen Richard Curtis’ brilliant acclaimed romantic drama Love Actually, then you’ve already seen a much-better version of Valentine’s Day – which not only tries to be Love Actually in style but in story. Just as there is in Love Actually’s story, Valentine’s Day has an adult helping a kid who’s lost a parent trying to come out to the love of his life; it’s got a character busting through airport security to stop a loved one from getting on a flight; it’s got the eager and horny youthful character; it’s even got two stories about middle-aged or older couples dealing with infidelity.

But even after stealing so many great elements and stories from Love Actually, there’s one thing that Valentine’s Day fails to properly steal: the heart and genuineness of Love Actually. There’s not a single character in Valentine’s Day that you will become emotionally invested in because absolutely every single tiny thing that happens feels forced or contrived. Nothing feels real. It’s unbelievable. You will notice these things early on, making everything after that realization boring. You will feel like you’re watching a movie that was made just to make money, not entertain. There’s nothing to learn from Valentine’s Day. There’s no moral to story. It’s a Hollywood vehicle made up over-complicated parts, driven by twenty cash-cows for the sole purpose of making you want to see the actors featured.

Even though several of the actors involved (Jennifer Garner, Ashton Kutcher, Bradley Cooper, Topher Grace and Anne Hathaway) give great performances, Valentine’s Day is not worth paying to see. If you’re looking for a fitting movie to see on this romantic day, save yourself some money and grief and check out Love Actually. (If you’ve already seen it, see it again. It only gets better!)