The witty humor of Thank You For Smoking with the heart of Juno Made for fans of great filmmaking and Jason Reitman's down-to-earth style of directing and storytelling. 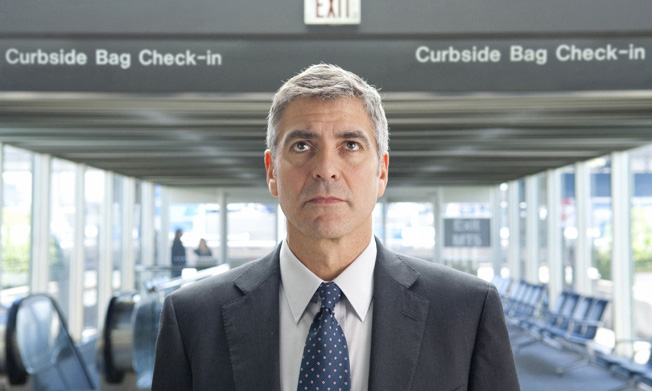 Phrases you hear more often than not right now.

Everyone
has an opinion on the current financial state of United States’
economy. There is no denying that things are bad. Everyone has been or
knows someone who has been personally affected by the recession. If a
film comes out with a main character whose job is to fire people, you
wouldn’t think the American public would want to see it. Not in “these
times.”

But you should. And I hope you do. That is my job. And here is why you should: Up In The Air is about more than just the firings; it’s about living, learning from and enjoying life.

Ryan
Bingham (George Clooney) spends more time each year in the air flying
from city to city for his job than he does in his own apartment. He’s
become so accustomed to this lifestyle that the things any common
person would see as impersonal – waiting in airports, going through
security, flying solo and staying in hotels – are warming and welcome
tasks and places to him. That is how numb and cold he has become due to
his job and the lifestyle that comes with it.

But
Ryan is about to become a victim of the poor economy that has kept him
employed. This lifestyle that he enjoys is being taken from him. The
company he works for is creating a new system of pulling off their
corporate firings: it will all be done over the Internet through a
video conferencing on both sides – making it an even colder experience
for those being fired than it was before. Ryan’s last hoorah is giving
a training while traveling to the twenty-something new girl, Natalie
Keener (Anna Kendrick, Twilight), that created the impersonal computerized system that will ground him indefinitely.

In the midst of their travels, Ryan has rendezvouses with a fellow frequent flyer, Alex Gonan (Vera Farmiga, The Departed)
– a woman whose cold personality only rivals that of Ryan. She refers
to herself as being just like Ryan, “only with a vagina” – a perfect
string-less counterpart.

Little Natalie is the catalyst in this
“warming-of-the-grinch’s-heart” tale. Her youthfulness, naiveté and
lack-of-experience makes both Ryan and Alex reflect on themselves,
analyzing their current situations.

The flight that Up In The Air
takes you on is an unpredictable, yet enjoyable one. Whenever Ryan and
Natalie reach their destinations and begin firing employees – complete
strangers – director Jason Reitman shows montages of the reactions –
breakdowns – of the employees that are “let go.” As if each of those
reactions isn’t intimately uncomfortable enough, knowing that Reitman
chose to shoot those scenes with actual recently laid off people – all
but two not being actors – brings those scenes straight to the heart.
The balance between those powerful moments and the comedic ones is
perfectly well-paced and edited. The result is straight-forward,
coming-of-(middle)-age tale.

Just like The Road (also opening this weekend), Up In The Air is one of this year’s best films. It’s got a great story, plenty of laughs and a big old heart – definitely not one to miss.