A slowly paced, muddy espionage thriller about a beautiful spy and a math teacher from Wisconsin. Made for i suppose that Jolie fans will like it, but Depp fans will realize why he only does well in eccentric roles. 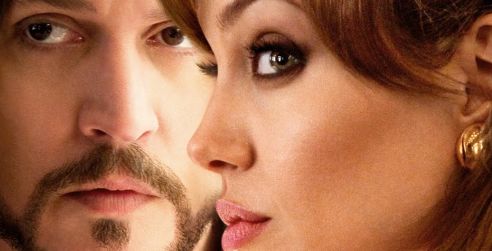 There are spy thrillers that are packed with action – think the Bourne movies – and then there are spy thrillers that always have the threat of action, but never reach the precipice of what could’ve been – think The American. Each of these types of spy movies have their advantages. The action-packed ones get us through the movie with flashy explosions, and our brains in the off position. Spy movies light on action rely on their cloak and dagger tricks and character development to get by. The Tourist is a strange mix of both these kinds of espionage thrillers, which doesn’t really work at all.

Elise (Angelina Jolie) is a spy. Well, that’s what we think she is anyway. She walks casually down crowded European streets knowing she’s being followed by government agents. She sits coolly at an outside café table, receives a mysterious note from a courier. Men in vans watch her through cameras and computer screens. What is the note? What does it say? The note is read aloud to us from a narrator in a woman’s voice, which I guess is supposed to throw us off (you’ll see what I mean). The note instructs her to burn it, which she does. The agents rush in, but not in time to save the note.

Elise follows instructions from the note and boards a certain train headed into the heart of Europe. Most of the beginning is spent watching Jolie saunter around in her high heels as her hips wag from side to side. Good, I suspect if they were putting on a runway show, not so good if you’re trying to build suspense for a mysterious cloak and dagger thriller.

She sits next to Frank (Johnny Depp) on the train and strikes up an aloof conversation with him. She’s never direct, but maybe she’s flirting with him. Who knows. Frank is a math teacher from Wisconsin, he reads spy novels. Now he’s met a mystifying, beautiful woman on a train in the middle of Europe. Things like this just don’t happen to a guy like Frank. It seems, though, that being around Elise has caused Frank to be mistaken for a man named who is wanted in 14 countries. Who is she? Scotland Yard, Interpol, and a gang of Russian gangsters are after Frank now.

The Tourist is confused. It isn’t smart enough to play the artsy card, and it isn’t dumb enough to play the popcorn-movie card. It’s stuck, somewhere in espionage movie limbo as an odd hybrid of a rom-com spy thriller. An earlier film from this summer, Knight and Day, did it a whole lot better. It was zany, fun, and Tom Cruise was exciting. Jolie is as sexy as ever, but her character is dumbed down, and the dialogue she’s given is supposed to be subtle and sexual, but just comes across as lazy. Depp has never looked more bored in a role. Like he’s just standing there, waiting for something to happen and then we realize we’re just like him. We’re waiting for something to happen. Anything. We’re waiting for the plot to reveal something that made all of it worth it. When the reveal comes, you might find yourself in my position. Yup, I called that “twist” a mile away, and so will most everyone else.