Perfectly defining the digital era we live in through telling the scandalous origins of Facebook, "The Social Network" showcases flawless filmmaking in every aspect. Made for anyone who who has ever used Facebook and anyone who knows good film.

Rated PG-13 for sexual content, drug and alcohol use and language. 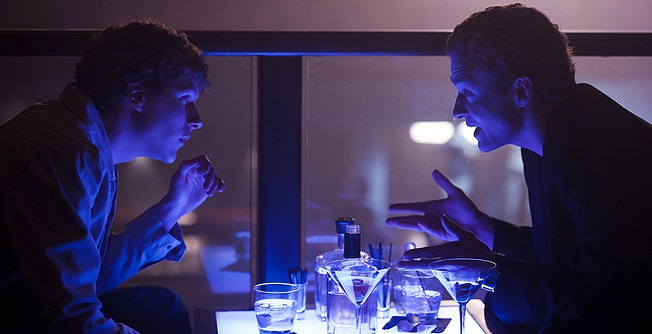 There are certain films you can watch to learn about different periods of history. For example, if you want to learn what it would be like to have fought in Europe during World War II, you watch Saving Private Ryan. A lot of reflection and analysis is required before making era defining films, like Private Ryan, so that the entire big picture can be shown. But just seven years after one of the most iconic era defining stories began, we somehow have a film that perfectly nails the age that we currently live in – The Social Network.

With over 500 million users around the world, everybody knows Facebook. If you don’t know Facebook, you are either a computer illiterate senior citizen or you live in cave (even then, I’m sure cave-dwelling terrorist leader Osama bin Laden knows what Facebook is). But what you probably don’t know is the controversial story behind its creation.

In Fall 2003, recently dumped Harvard undergrad Mark Zuckerberg hacked the Harvard network, stole photos of hundreds of female students, created a site that allowed you to rank them based on their looks, blogged about it and crashed network due to an abnormally high volume of traffic – all while drunk. Although Zuckerberg got in trouble for his actions, it gained him notoriety amongst his peers. Two days later he was approached by a set of rich twins looking for a programmer who could write code for a social networking site exclusively for Harvard students that would help them get laid.

After a few weeks Zuckerberg had his own idea that branched off from the twins’ proposed site. Zuckerberg called it “The Facebook.” Although it was extremely similar to the Facebook we have today, he kept the twins’ idea of keeping it exclusive to students with an @harvard.edu email address. To make this site all on his own, Zuckerberg went to his wealthy business major best friend Eduardo Saverin for financing. Zuckerberg would be the CEO owning 70% of the company and Saverin would be the CFO with 30%.

As The Facebook rose in popularity, it expanded to include other Ivy League schools. Two weeks after making its way to Stanford, Napster creator Sean Parker took notice and set his sights on making Facebook his latest business venture. Upon meeting, Parker and Zuckerberg hit it off.

Of course, the twins felt that Zuckerberg stole their idea and sued him. Later, because of Zuckerberg’s actions involvement with Parker, Saverin felt he was burned in bad business deals and sued also filed a suit against Zuckerberg.

For the most part, director David Fincher (Zodiac) has shown a trend of getting better and better with each film. Just as some are claiming that with The Social Network he has created this generation’s Citizen Kane, I agree and add that The Social Network is an absolute masterpiece. The decisions he made in making this film are perfect.

Actor Jesse Eisenberg (Zombieland) has been clumped into the same category as Michael Cera, saying he plays the same character in every movie. Just as Cera broke his mold with Scott Pilgrim vs. The World, Eisenberg has defied expectations by playing Zuckerberg. While the media would have you despise his character, in The Social Network you pity him. He is a genius damned by his brilliance. He doesn’t seek money or sex – “just friends” (go figure).

Eduardo Saverin is played by future Spider-Man Andrew Garfield (The Imaginarium of Doctor Parnassus). I don’t expect you to know who he is, but be prepared to see him in cinema for a very long time. Garfield showing a very promising future.

One of the most interesting things about The Social Network is that barely shows the characters in negative light. Yes, some of them do dumb things – but as they do, more than feel hatred for their wrongdoings, you feel bad for them. The only one that you ever get an inkling of strong dislike for – even if it is just for one small moment – is Sean Parker (musician Justin Timberlake). It is not only fun to see musician Timberlake playing the role because Parker is so anti-music industry, but because Timberlake plays him with such finesse and charisma – something only a pop-star could do.

The icing on the cake is the score. Trent Reznor from the one-man-band Nine Inch Nails (NIN) co-wrote the score for The Social Network. His bold decisions in music work well from the opening credit forward. While you may recognize the fact that score is brilliant from the beginning, as you become entangled in the story, the score becomes part of the movie. You forget that you are even listening to a scored film. Just as you may not recognize a film’s constant lightly, you quickly become unaware that a score is even playing.

I enjoyed The Social Network so much the first time around that I ended up going to a second press screening only three day after the first. Not only was the film just as good the second time around, but I realized something that has become my favorite part of the whole film. The Social Network opens with Zuckerman having a speedy conversation with his soon-to-be ex-girlfriend (Rooney Mara, Nightmare on Elm Street). Don’t feel bad if you get a little lost during it – it is just trying to warm you up for the rest of the movie. But if you are able to grasp everything that is being said, pay close attention: the entire film is crammed down into that one short, seemingly-insignificant scene. Seeing The Social Network a second time sure makes this scene an absolute delight.