Although the market has been saturated with YA adaptations, 'The Maze Runner' is one that doesn't require you to be a teenager in order to enjoy it. Made for not just the teenage fans of YA novels, but anyone who can enjoy a thrilling teenager-based suspense-filled flick.

Rated PG-13 for thematic elements and intense sequences of sci-fi violence and action, including some disturbing images. 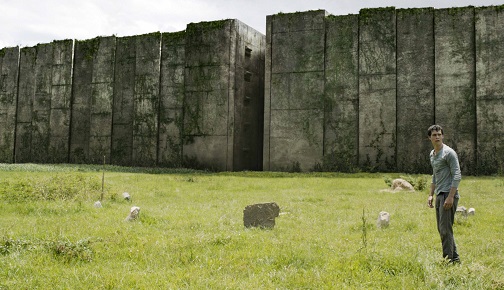 Like everyone else (excluding teenagers), I’m burned out on YA (Young Adult) book adaptations. For some reason, YA authors believe that they all have to tell the same story: a gifted teenager must save the world from its oppressive dystopia. I’d be lying if I said that The Maze Runner wasn’t more of the same, but it at least features high filmmaking qualities, it’s entertaining, and it’s wildly intense – something that most of the others don’t have.

The movie opens with a Thomas, an amnesiac teen, waking up on an elevator ride to the surface of Earth. When the caged cart opens, he finds himself surrounded by other teenage boys who have been living in a walled-in glade for anywhere between one month and three years. Two walls partially open each morning and close each night. Beyond the entrance lies an expansive maze and, each day, chosen “maze runners” pass through its gate in search of an exit. At the end of the day, they must return before the gate locks, for terrifying unknown monstrous creatures roam the maze. No maze runner has ever survived a night on the other side of the wall.

Being a rebellious soul, Thomas doesn’t simply put up with surviving in the glade. And he’s certainly not going to accept the deaths of any of his new friends. Like The Hunger Games‘ Katniss or Divergent‘s Tris, Thomas is about to do everything possible to break the system, escape the maze and start living.

Overall, The Maze Runner feels like a mash-up of tons of very well-known movies, books and television series. There’s little Hunger Games. A little Divergent. A little Lost. A little Ender’s Game. And a little Lord of the Flies. Having said that, The Maze Runner is fun, tense and thrilling. The teen actors, most of which are relative no-names, give very good performances. First-time feature director Wes Ball delivers a fun movie that’s already got a sequel in the works. Is it good enough to make me want to read James Dashner’s book series? Not at all. But I definitely look forward to what lies ahead in the film series.