'The Martian' has landed to plant its flag before we’re overrun with the rest of the year’s Oscar bait. Made for anyone wanting to bear witness to the year's most thrilling crowd-pleaser. 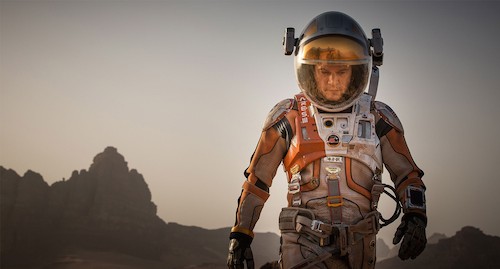 Everyone’s been asked the old “if you were stranded on a desert island” question a million times, right? Well, what if it was Mars? That is the struggle astronaut Mark Watney (Matt Damon) faces in Ridley Scott’s amazing new sci-fi/thriller The Martian.

Based on the novel by Andy Weir, I hoped we’d be in for something of top caliber with both Damon and Scott involved. Let alone the supporting cast features a slew of A-listers, and being adapted by Drew Goddard (Cloverfield, The Cabin in the Woods, Netflix’s Daredevil). To say the film lives up to expectations is one thing, but as Watney would say, “here’s the rub”: the film is even better than the book!

Now, Watney is forced to make good on his skills and plans to “science the shit out of” his situation. Growing potatoes and using condensation for water reclamation, he’s in a race against time before he starves to death. Meanwhile NASA must find a way to either at least get him more food while they plan his rescue, or just simply figure out how to do even that.

Due to technical difficulties, I was unable to see The Martian the way Scott intended it in 3D. Even in 2D, the film is just a wonder to behold. It’s the best rescue film of its type since Castaway, Apollo 13, or even Gravity — of which is the easiest to compare. The film is never bogged down in the science of the situation — although there is plenty of nerd-moments carried over from the novel.

Also making its way from page to screen is the film’s sense of humor. You’d kind of have to have a sense of humor to survive the situation, and Damon brings out the best lines. Some straight from the book, some added by Goddard, but all brought to deadpan hilarity by Damon. It takes a strong presence to make us care for such a facetious everyman and Damon certainly takes the cake.

There’s a lot of science running through The Martian, but it never gets in the way of the story, which has been carefully streamlined and tightened up. A man who’s odds are never in his favor, is fighting to keep himself alive with any chance of hope light-seconds away, i.e. about four years. The aforementioned rest of the cast assist Damon admirably, while Kristen Wiig, Jeff Daniels, Sean Bean, Chiwetel Ejiofor, and Donald Glover all hold their own with plenty of moments to shine.

Featuring astounding special effects, both hilarious and heartbreaking moments, plenty of heroism, and enough jaw-dropping, heart-pounding set pieces to keep you on the edge of your seat, The Martian is here to plant its flag before we’re overrun with the rest of the year’s Oscar bait. This shall not be excused as just another excuse for Scott to play around in space, it’s one of the year’s best films, period.