A rom-com for everyone to enjoy. It may be an updated 'Romancing the Stone,' but the comedic chemistry sizzles more than enough to get the job done. Made for action fans, comedy fans, rom-com fans. 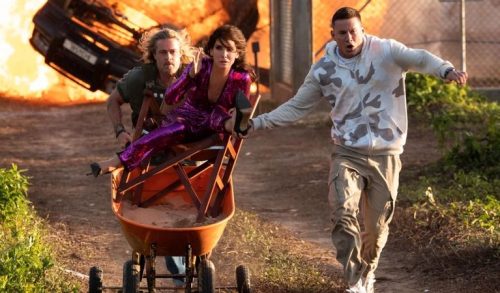 For anyone thinking The Lost City looks like an updated Romancing the Stone, you’re on the right track. Centered around a romance novelist who’s whisked away on the adventure of a lifetime with a quippy potential love interest… ok, so it is an updated Romancing the Stone. And that’s just fine, there’s an homage for just about everything — or flat out remade — eventually, and The Lost City gets by on the cast’s charm and hilarity. A lot of it you’ve seen before, but think of it as Romancing the Mad Libs, and it’ll help as hilarity, double entendres, and shenanigans ensue.

Loretta (Sandra Bullock) is a best-selling romance novelist setting out on a tour for her latest book. What Loretta’s agent, Beth (Da’Vine Joy Randolph), and her cover model Alan (Channing Tatum) soon find out, is that this will be the last of adventures for her fictional characters, Angela and Dash. Soon after breaking the bad news, Loretta is kidnapped by Abigail Fairfax (Daniel Radcliffe), who is convinced that she can help him find Calaman’s Tomb, which should lead them to “The Well of Tears” — locations in her novels. Now, Alan sets out on a quest to save her — because he can barely separate fact from fiction — with the help of Jack Trainer (Brad Pitt), while Beth sets out on her own mission to bring her home as well.

There’s not a lot in The Lost City we haven’t seen before, but directors Aaron and Adam Nee infuse the film with a ton of fun. Uncharted just embarked on some very similar escapades, but the results here work slightly better thanks to the chemistry of the ensemble. Sadly, Radcliffe is the weakest link as Abigail in a character that could have been played by anyone and he does nothing to make it his own. When it comes to the coupling of Bullock and Tatum, they work fantastically off each other comedically, but don’t quite have the sexual chemistry the film thinks they do. And Pitt just steals every scene he’s in. Try not to laugh when his character is introduced over a phone call and the first thing you hear is Jack munching on something crunchy.

One thing holding The Lost City back, is its length. As much fun as the movie is, there’s no reason for it to be nearly two hours. And most of the subplots surrounding Abigail’s goons shines for the padding it is, even if it does manage to give one of them a surprising character arc. Considering there’s four credited writers — two of which are the directors — it shouldn’t come as a surprise that it starts to feel overstuffed before the credits roll. And stick around for at least one mid-credit scene that’s just as hilarious as the rest of the film. Rom-coms haven’t been in high demand with the current global atmosphere, so when a good one comes along, it’s worth venturing out. With theaters continuing to open, and restrictions being lifted, Paramount may have stumbled upon the perfect time for The Lost City to strike while the iron’s hot.