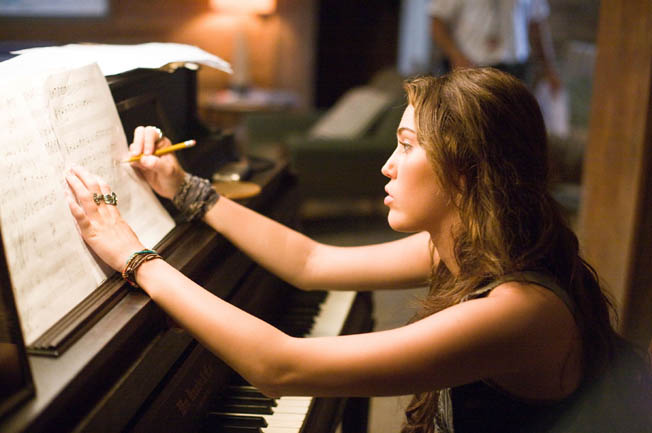 Ever Nicholas Sparks story is the same. They’re like mad libs: he simply adds in different professions and backstories to the already-established characters. There’s always a “bad boy” or girl who has a softening of the heart, a conflict with a parent, a romantic interest from “the other side of the tracks,” redemption, forgiveness and a character who suffers an unexpected death. The Last Song is yet another typical, rearrange-the-pieces Sparks fairytale.

In The Last Song, Miley Cyrus (Hannah Montana) plays Ronnie – the “bad girl.” She has had a stubborn beef with her father (Greg Kinnear, Little Miss Sunshine) since her parents’ unexplained divorce years prior to the movie’s opening. Ronnie was invited to attend Julliard, but the divorce damaged her so much that she refuses to touch a piano, being a talent she shares with her father. The summer before her mother remarries, Ronnie and her young brother are sent to live with their father in Georgia.

Minutes after arriving, Ronnie gives her dad the cold shoulder, says mean hurtful things and heads off to party in the small local beach town. The first person she literally bumps into is a dreamy boy (Liam Hemsworth, Knowing) who tries way too hard to flirt with her. Even though she shoots him down, we, the audience, know he will be the romantic interest because he’s a good-looking, rich, bare-chested manboy that never stops showing off his pearly whites. As a relationship develops between Ronnie and the manboy, she and her father begin to resolve their tension. Just like the last Sparks film Dear John, the story between the main character and the father is far more interesting than the romantic one.

To not ruin the only unknown element in the film for those who will see The Last Song despite it being the same chick flick you’ve seen one hundred times, I will not reveal which character dies nor how.

Miley Cyrus cannot be called a “good actress” yet. She plays the same character all the time. In The Last Song, she plays Hannah Montana on a dark and depressing day. But it works here. The role is so simple that it doesn’t require a strong actress. Considering she’s just a kid, maybe some day Miley will make us change our minds.

Greg Kinnear on the other hand is always good. In reality, he’s the only character worth caring for and the only character you will care for in The Last Song. The rest of them range from awful “scenery chewing” characters to mediocre central characters. The most annoying and unbelievable of them all being Ronnie’s younger brother Jonah. Jonah’s character is written like the annoying comic relief younger brother from The Blind Side – a youngster that acts “grown up for his age,” constantly cracking supposedly mature jokes. From the first time you meet Jonah’s character you will be hoping that he is the one who tragically dies. And what really makes his character unbearable is the child actor who plays him, the Martian Child Bobby Coleman. Let’s hope this is his last song.

While The Last Song is mediocre in almost every aspect, it’s a chick flick – girls and women will love it. They’ll bawl their eyes out, and then see it again. Some fathers may like it, but only because it has a manipulative storyline that would tug at any daddy’s heart.