The House with a Clock in Its Walls

That old Amblin magic is missing as Eli Roth goes against his own grain and makes a family film with no blood, or life. Made for kids desperate for something spooky while parents wait for the next 'Goosebumps.' 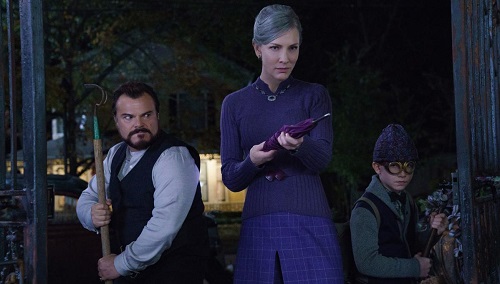 Amblin and doomsday clocks and warlocks, oh my. The House with a Clock in Its Walls sounds like a perfect fit for Amblin Entertainment on paper. After reading through the Wikipedia synopsis of John Bellairs’s 1973 children’s book, you can’t fault screenwriter Eric Kripke. It seems to follow the first book in the Lewis Barnavelt series to a T.  While all the boxes are ticked, there’s something that doesn’t quite tock.

It’s 1955 in New Zebedee, Michigan. Ten year old Lewis Barnavelt (Owen Vacarro) has been orphaned and sent to live with his estranged warlock uncle, Jonathan (Jack Black). Quickly, Lewis senses there’s something off within Jonathan’s house. Turns out, the original owner, Isaac Izard (Kyle MacLachlan) and his wife Selena (Renee Elise Goldsberry) died in the house. But not before Isaac hid a doomsday clock within its walls and now, only Lewis, Jonathan, and their eccentric witch neighbor Florence Zimmerman (Cate Blanchett) must beat the clock with Isaac hot on their tails after Lewis brings him back from the dead using a spell to impress his friend Tarby Corrigan (Sunny Suljic).

Roth keeps touting that his one piece of advice from Steven Spielberg was to make it scary, but it never is. He’s clearly working way outside his comfort zone. This is the man who created the Hostel franchise after all. It’s also never as funny as it thinks it is either. Black does what he can, but he’s always just playing himself, something that’s been wearing thin for years. Vaccaro tries to be the next Jacob Tremblay, but has a long way to go. One minute he’s charming, the next he’s whiney. And he could really use some coaching on his cry face.

The best part of the movie — which should be the house itself — is Blanchett. She commands the screen and keeps Black on his toes as a pair of bickering neighbors whose platonic friendship revels in verbal sparring.  Unfortunately, for a movie filled with magic, that’s what it’s missing the most. Roth tries to keep the film chugging along, but it never awakens your inner child. Considering I still watch old school Amblin films on a regular basis, there’s a lot to live up to when your Universal logo is out of the ’80s followed by Elliot and E.T. flying onscreen, and it rarely does.

The House with a Clock in Its Walls does what it can and ticks along to the finish line — thankfully, MacLachlan makes for a decent enough villain. But it never manages to find its footing and go full steam ahead. Kids will get a bigger kick out of it than their parents — which is the whole point of course — but that’s what makes all the difference. There are kids films, and there are family films. The House with a Clock in Its Walls is the former. Kids may enjoy it, but the adults will be left saying, “well at least it didn’t suck.”