The Hobbit: The Battle of the Five Armies

It's bittersweet coming to the true finale of the Middle-Earth Saga, but 'The Battle of the Five Armies' is a worthy ending to 'The Hobbit' trilogy. Made for those who enjoyed the first two 'Hobbit' films. 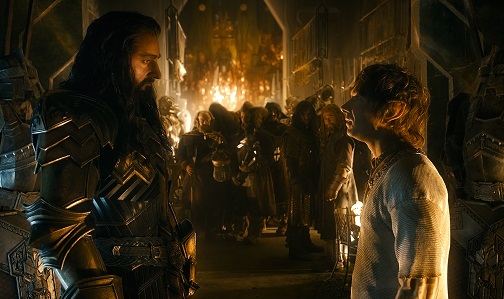 Being a lover of Peter Jackson’s first Middle-Earth trilogy, the Lord of the Rings series, I’ll be the first one to admit that The Hobbit trilogy isn’t as great. It’s obvious that the post-production decision to expand the structured two movies into three broke the links that would have made the series as tight as the Rings films. There’s no arguing that. The proof lies in the fact that the first two Hobbit movies, An Unexpected Journey and The Desolation of Smaug, only earned three Oscar nominations each, while The Fellowship of the Ring earned 13 nominations (four of which it won), The Two Towers earned six nominations (two of which it won) and The Return of the King swept the Oscars be winning all 11 awards that it was nominated for. The Hobbit: The Battle of the Five Armies is not about to do the same thing at the upcoming Academy Awards; however, it’s still a perfect way to not only close out this second trilogy, but to cap off the entire Middle-Earth saga.

The Battle of the Five Armies kicks off right where The Desolation of Smaug ended. While each of the previous five Middle-Earth films kicked off with a flashback type of intro, Five Armies does not. Instead, the resolution of the Smaug storyline is the kick-off intro for the final film. In fact, we don’t even get the “Battle of the Five Armies” title card until it has been completely resolved.

Before long, we follow Bilbo and the dwarfs into their reclaimed home at Erebor, the kingdom beneath the mountain. Tension rises as Thorin becomes hell-bent on finding his birthright, the Arkenstone. With his logical wits about him, Bilbo tries to keep the group together by grounding Thorin back into reality, but a major distraction is about to ruin his efforts.

Knowing that small pack of dwarfs is the only thing standing between an army and a mountain full of gold and treasure, it won’t be long before an army arrives to overthrow Erebor. Make that five armies. Much like the battle of Helm’s Deep in The Two Towers and the siege of Minas Tirith in The Return of the King, a great portion of Five Armies is dedicated entirely to this grand-scale epic war that gives the movie its title.

Having not read The Hobbit since I was in middle school, I couldn’t remember how the tale was going to end. Truly, I was surprised by where this final film went. Not only was it bittersweet in the way that it caps off both the Hobbit and the Lord of the Rings films, but it’s also much darker and sadder than expected. Throughout the entire Lord of the Rings series, we only lose one member of The Fellowship; however, we tragically lose more than that in this final chapter.

It’s impossible to compare The Hobbit with The Lord of the Rings because The Hobbit isn’t even in the same league as Lord of the Rings – but that hasn’t stopped me from being a fan. The Hobbit has given me the opportunity to explore and spend more time in Middle-Earth, something that I’ve truly missed since “the king returned” in December 2003. Some moviegoers highly anticipate the upcoming Star Wars episodes that will let them return to a galaxy far, far away, but The Hobbit was my chance to return to a cinematic world that I fell in love with 13 years ago. Loving the world of Middle-Earth, The Battle of the Five Armies fully satisfied me. I’m sad that there will never be more Middle-Earth, but I’m glad that I got the chance to experience it again. The Hobbit movies may not be of award-worthy caliber, but they’re heartfelt and a whole lot of fun.