With a funny script, creative action and an amazing director, "The Green Hornet" is sure to beat your expectations. Made for fans of laughter, Seth Rogen, Michel Gondry and refreshingly original superhero, comedic and stylized action flicks. 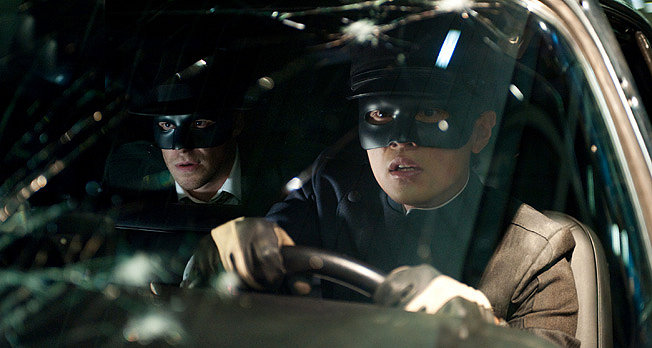 Before seeing the film, earlier this week I posted a feature titled “Why You Should Want to See The Green Hornet“ hoping to strike interest in those who prematurely wrote it off. In it, I cast three predictions as to why The Green Hornet would be superbly entertaining – despite the negative word of mouth. After seeing the film last night, I was vindicated.

Based upon the old radio show, serials and television series, The Green Hornet tells the story of defiant, wealthy trust-fund child Britt Reid (Seth Rogen, Pineapple Express) and his quest for justice. While Britt dons The Green Hornet name and organizes the operation, his trusty side-kick Kato (Taiwanese pop star Jay Chou) is the muscle. Highly trained in Kung Fu, Kato also designs the weapon-wielding vehicles. Setting themselves apart from typical comicbook crime-fighters, instead of claiming to fight for good, they give the appearance of fighting for evil, taking down other bad guys in order to “control Los Angeles’ crime.”

The Green Hornet is a fairly well-rounded package. Written by Seth Rogen and childhood friend Evan Goldberg, who also co-wrote Superbad and Pineapple Express, the movie is a lot funnier than you would ever expect it to be. Instead of ranting his way through movies in typical fashion, Rogen actually sticks to a script and keeps it concise. If he did improvise as much as usual, the babble was left behind on the cutting room floor. Kato’s character introduces a new unique style to action sequences. I wont spoil “Kato Vision” for you, but know that it is downright awesome and it is all due to The Green Hornet‘s visionary director Michel Gondry (Eternal Sunshine of the Spotless Mind).

The only complaint I could see people having with The Green Hornet is its brief dabbling in campy content. Towards the end of the film, Chudnofsky takes a turn to the theatrical. In two short scenes he plays off more corny than intimidating, which isn’t a very strong choice considering how far into the movie we have come when it decides to make that campy turn. Because those scenes are short and not too important, they wont affect the overall positive entertainment value of the film.

It is not often that I make this request, but The Green Hornet warrants it: I want a sequel. If that says anything about how much I love this film, then I hope you will get out there and see it as soon as possible.