Boring and never as outlandish as it should be. Made for ? One of the hardest questions I've ever had to try answering. 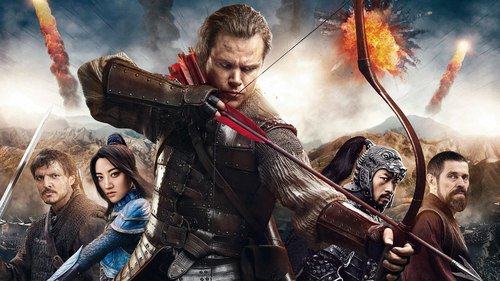 Back in the early 2000s when wuxia/kung fu films like Crouching Tiger, Hidden Dragon or anything starring Jackie Chan, were all the rage in the U.S., I became transfixed on the beautiful artistry of Yimou Zhang’s Hero. Full of amazingly choreographed fight scenes and stunning cinematography, I didn’t care if the story didn’t translate well. I saw it four times and you can bet I was back when Zhang’s House of Flying Daggers arrived. Unfortunately, by the time 2006’s Curse of the Golden Flower came around, the genre was repetitive. When I learned Zhang was directing The Great Wall — a creature feature, starring Matt Damon, and set against the backdrop of China’s titular wonder of the world, I perked up. Well, no matter how much money you can throw into a production, plenty can still go awry.

During the Song dynasty, William (Damon) is caught searching for black powder. Along with fellow mercenary Tovar (Pedro Pascal), they are captured after killing some kind of creature. They bring the creature’s hand with them where they are taken prisoner by the Nameless Order, led by General Shao (Zhang Hanyu) and Strategist Wang (Andy Lau). It doesn’t take long before the creatures spring their first attack, leaving William looked at as some kind of savior after killing one of them, and now, a 60-year-old battle has begun, with William and Tovar caught in the middle.

Any creature feature fan expects the film to be fun, no matter how ludicrous the premise. The Great Wall is not fun. I was hoping for unintentionally hilarious, but even Damon’s dopey accent doesn’t work. Zhang at least still knows how to film an action scene, even if some of them patter on way too long. Sadly, the screenplay — credited to Carlo Bernard, Doug Miro, and Tony Gilroy — is hindered. It could have been better had the credited story trio (Max Brooks, Edward Zwick, and Marshall Herskovitz) been allowed to let loose. Not even the shortish 103 minute runtime can save the day. The film feels hours long and you never once care for anyone’s plight. It’s all just a bloated special effects extravaganza. At least the monsters are kind of cool. But even they aren’t worth wasting your time or money. The Great Wall is really just “The Great Yawn.”