Broken promises. Made for fans of the book..? Maybe not...

Rated PG-13 rated PG-13 for a mature thematic image and some sci-fi action/violence, and for being ultimately underwhelming. 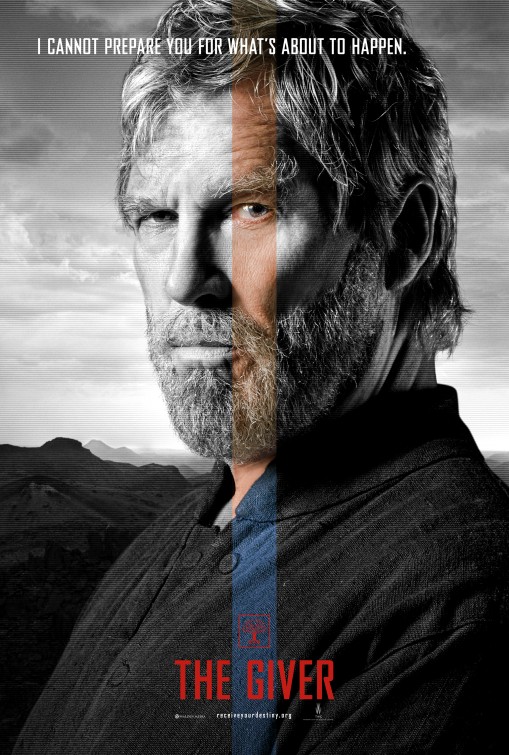 Based on Lois Lowry’s book of the same name, The Giver had the disadvantage of coming out after other, similar YA films (Divergent, The Hunger Games), which also seemed derivatives of each other, and of other movies like Battle Royale. But it had the advantage of having bankables Meryl Streep (“Chief Elder”) and Jeff Bridges (“The Giver”) star alongside promising relative newcomers Brenton Thwaites (“Jonas”) and Odeya Rush (“Fiona”). Even Katie Holmes gets a job in this one, as well as True Blood favorite Alexander Skarsgård (and if you pay close attention, an almost unrecognizable Taylor Swift shows up as “Rosemary”).
The advantages don’t end there, as the set up and reveal for this particular YA dystopian future are more utopian than similar fare (at least first, of course). Director Phillip Noyce does a wonderful job of crafting a beautifully shot picture of a society that is so involving, you may not notice it’s in black and white until color shows up, a la Pleasantville. It was one of the few futures I wouldn’t mind living in, again, at least at first…
Our old world was done in by a “Ruin” whose explanation is neither needed nor given. Our new world is set up into environmentally sound Communities in which people are assigned responsibilities as they age (like a bicycle at age 8), and ultimately – at a graduation ceremony at age 18 — jobs that match interests or skills they have demonstrated previously. Such skills are identified by The Elders of the Community, who are electronically everywhere it seems.
But whatever was involved with and before The Ruin is so awful that those memories are believed to be a burden on the citizens of The Community. One person is entrusted with the past, The Receiver of Memory, who eventually must pass on such burdens to one who is capable of receiving them. The Receiver becomes the Giver. And somewhere in here is where The Giver loses its footing, and not only because its crucial “Giving” scenes are done in a way that The 5th Element did before (when Milla Jovovich’s “Leeloo” received a flood of images that introduced to her the horrors that men do), but because of some trappings in the script that undermine the thoughtful set up.
It also decides to be a short movie. At a very brisk-feeling 97 minutes, much is left out, much is rushed, while sadly some truly silly parts are left in (the Border of Memory Idea, for instance, that sets up its Hollywood ending). Shortly after we enter the second Act of our tale, we are rushing headlong into a typical Hollywood-esque Third Act, complete with closing credit music that is so obviously pandering to its YA audience it’s embarrassing, especially after such a promising beginning. The Giver had brought up interesting questions regarding of the value of childhood, the role of the individual, the power of faith, and the failure of freedom; but it fractured from there into a slow collapse culminating in a somewhat sequel-teasing but unsatisfying end. It leaves much unanswered, but little to be desired. I left feeling let down, as if the movie was incomplete; vague or unfinished, somehow. If there is a sequel, I will see it in hopes that The Giver 2 delivers on its original promise; but not because its prequel itself delivered.