The Edge of Seventeen

Sharp, hilarious, and poignant. Steinfeld finally shows her 'True Grit.' Made for fans of 'Clueless,' 'Juno,' or anything out of the John Hughes factory.

Rated R for sexual content, language and some drinking - all involving teens. 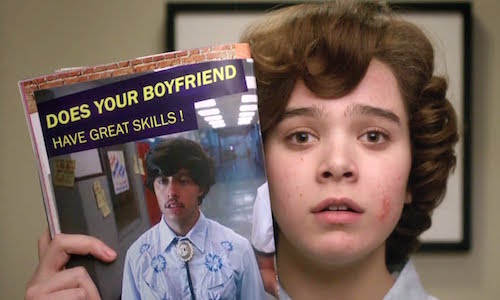 Every adult understands the awkwardness of life right before entering “adulthood.” It’s still odd to me how anyone at the age of 18 is legally an adult. As it stands, there have been many teen movies over the years, all clamoring to be a new generation’s voice. Fast Times at Ridgemont High and almost all of John Hughes’s résumé, through Clueless, She’s All That, Mean Girls, and Juno. Now, the Millennials can lay claim to their own, with a film that gives hope that everything may be OK after all and to just let life happen — because there’s no stopping it and it is a force to be reckoned with. And in quite a leap, writer/director Kelly Fremon Craig has gone from the abysmal Post Grad to The Edge of Seventeen. If one thing’s for sure, Craig understands the teenage crowd far better than the newly graduated.

Nadine (Hailee Steinfeld) has always lived in the shadow of her older brother Darian (Blake Jenner). An outcast by nature, she finds the friend of a lifetime in elementary in Krista (Haley Lu Richardson) as they cruise the high school scene together. That is until after a night of drinking while Nadine’s mom Mona (Kyra Sedgwick) is out of town. Krista hooks up with Darian and now Nadine’s life is ruined forever. Instead of lashing out, she introverts more than ever, but not without taking a time out to stalk older classmate Nick (Alexander Calvert) while possibly starting up an actual relationship with the every-bit-as-awkward Erwin (Hayden Szeto). Nadine finds refuge and advice from the least likely of sources, one of her teachers, Mr. Bruner (Woody Harrelson).

It seems unfair to place all the blame on Craig for the disastrous Post Grad — she did only write it. However, all films start with the script. Thankfully, she’s certainly bucked up, or got in touch with her inner teenager, because there’s far more that resonates here than in her first attempt. It also might have helped that she directed Seventeen and had complete control. Whatever happened, The Edge of Seventeen lives up to the hype it’s been coasting on for the last few weeks. With a razor sharp script and a fantastic cast, Craig delivers a film that fits right alongside Juno — another hilarious teenager up to shenanigans.

Steinfeld finally gives another lead performance living up to her True Grit debut. Harrelson tries to steal the whole movie away from her and Szeto is another standout, with Richardson also getting a few moments to shine. Not sure if there’s anything here I’d consider buzzworthy, but it’s better than most films released this year, and one of the funniest. The Edge of Seventeen thankfully is being marketed correctly harkening back to the classic teenage comedies of yesteryear, and rightfully so. I’m not sure if it’s an all out classic, but it’s definitely a shining example of teen comedy done right.