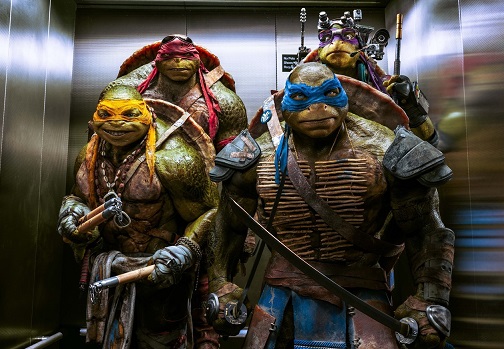 As bad as they are, the original Ninja Turtles movies are a piece of my childhood nostalgia. Just like he did with Transformers, Michael Bay has just tried to kill another piece of my happy childhood. Luckily, I still have the old Ninja Turtle movies to use to satiate my need for the half-shelled heroes.

The new Teenage Mutant Ninja Turtles is a reboot. It recreates and redefines the origins of the six-plus-foot-tall vigilante ninja reptiles, introducing them to aspiring reporter April O’Neil (Megan Fox) and to the villain-to-be Shredder along the way. In this re-telling, Shredder has a plot to unleash the same fate on New York City that Dr. Connors (a.k.a. The Lizard) tried to unleash on New York City in The Amazing Spider-Man. (Shredder even tries doing it in the exact same fashion.) Unlike Spider-Man, Teenage Mutant Ninja Turtles takes forever getting to the action and the plot.

The old Ninja Turtles movies knew what they were trying to be – stupid and silly kids movies – but this incarnation is oblivious to tone. At times it’s childish, which is fine. At times it’s adult, which is also fine – but childish and adult don’t mix well in a 100-minute movie. The silliness is spread too far apart in this serious movie and the serious stuff undermines the childish. Too much time is dedicated to the not-very-intriguing story. Although the action moments are a lot of fun, they’re spread too far apart and the seriousness that follows each fun moment comes as a complete buzzkill.

If I had to choose between the old and the new Turtles movies, I’d take the old. Sure, there are fun moments – but the identity crisis of the new Michael Bay-produced Teenage Mutant Ninja Turtles ruins it.