A boring movie about dancing made simply for those who enjoy dance. Made for fans of modern dance; why are they going to like it: because of the modern dance. 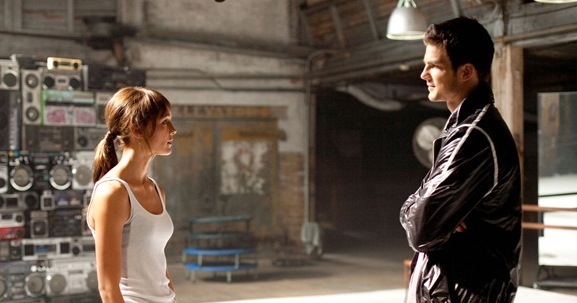 Aside from one specific scene, there isn’t a noteworthy filmmaking aspect to Step Up 3-D. The story is absurdly awful and as you watch the weak storyline unfold, you can’t help but wonder if it was greenlit just to have another cheap dance movie in theaters making money.

The main character in Step Up 3-D is Luke (Rick Malambri, Surrogates). Oddly enough, he hardly dances in the movie. No, Luke has a greater ambition – he wants to be a filmmaker. While filming his documentary on how dance affects the lives of dancers, Luke sees freshman student Moose (Step Up 2: The Streets) win a dance-off against a dangerous dance-gang on the NYU campus and rushes to aid him from being arrested. Apparently, dancing on NYU property can get you arrested.

Because Moose danced so well, Luke takes him back to his dance-gang’s lair. Luke’s dance-gang is called the Pirates and his lair is exactly like Shreader’s in the Teenage Mutant Ninja Turtles movies – it is a “cool,” safe place for these societal misfits to fit in. But Luke has a problem. He owes five months of unpaid bills or the bank is going to put to their warehouse lair up for auction. That is the reason why Luke rescued Moose – he needs Moose’s strong dancing skills to make it into and win a dance competition called “World Jam.”

Although the title of the competition would lead you to believe that World Jam is of Olympic proportions, it is very much less important. To make it into World Jam, the Pirates must win two qualifying dance-offs. That’s it. If they win the just one dance-off in World Jam, the Pirates will receive a $100,000 cash prize and be able to stay in their lair. (The last time I checked, $100,000 towards renting a massive warehouse building in downtown New York City will not go very far, especially when you already owe five months in back payments and fees.)

Every dance scene in Step Up 3-D is the same. The camera is in the same stagnant spot and the dancers perform directly in front of the camera as if they are dancing on a stage right in front of you. The dancing is better filmed in So You Think You Can Dance. Step Up 3-D feels like it was shot and directed by its amateur filmmaker central character Luke. It is boring and sub par.

The 3-D is nothing more than a gimmick to make a few extra bucks per ticket. Although it is advertised as having been filmed in 3-D – like Avatar – without a doubt, most of it was not. A good portion of it has the bad taste of Clash Of The Titans’ transferred 3-D. Even if you fall into that category of people that will enjoy Step Up 3-D (modern dance fans), do yourself a favor and see it in 2-D.

Just before the climax of Step Up 3-D, there is an unfitting-yet-amazing scene that is worthy of recognition. Filmed as an homage to the classic dancing musicals in the early days of film – more specifically Singin’ In The Rain – there is a long single-take scene with two lovers dancing through a New York City neighborhood to classical music. The dancing, choreography and cinematography in this scene is phenomenal. Had the entire movie been shot, stylized and written in this manner, Step Up 3-D would have been sensational.

If you like modern dance – mostly hip hop dancing – then you will dismiss the lack of originality, story and acting and enjoy Step Up 3-D for that reason alone. If you are a hater of modern dance, then stay home and pop in an old Astaire/Rogers DVD – back when dancing was really “dancing.”