Sin City: A Dame to Kill For

'Sin City' is back in all of its black & white noir glory, but the nine-years-later sequel is sloppy, confusing, jumbled and a little too late. Made for people who know the source material very, very well. 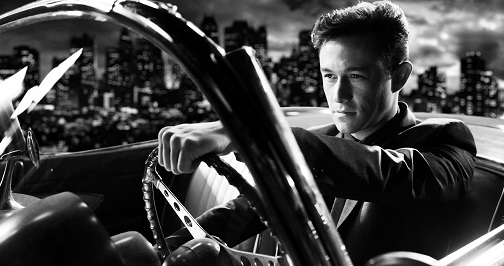 I adore the first Sin City. From the moment I laid eyes on its 100 percent unique look and style in the first teaser trailer, it had me. Leading up to the April 1, 2005 debut of Robert Rodriguez and Frank Miller’s (and Quentin Tarantino’s) adaptation of the comic books, I bought the whole collection of graphic novels (aka, big comic books). They were brilliant, so when I finally got to see the movie on opening day, I relished in the (nearly) picture-for-picture and word-for-word big screen version. It was absolutely brilliant – but I’ve been worried about the sequel, A Dame to Kill For, for two reasons: one, it’s been nine years since the first one debuted. Is the sequel going to have relevance with audiences, or has the time caused a disconnect? Two, both directors have collectively made some of the worst movies to come out in the past decade. Was the first movie a lucky strike, or would they be able to pull off magic again? Before I can give you my opinion of A Dame to Kill For, I’ve got to explain the history of the last Sin City movie and the layout of the new one.

The Sin City graphic novels follow various characters through various storylines – all of which involve “booze, broad and bullets” (that’s the title of one of the graphic novels). A central character may get his/her head blown off in the end, or one may ultimately fry in the electric chair, but it doesn’t matter because there’s never an established timeline in the series. For example, Marv (Mickey Rourke) gets burned up in the first movie, but he’s entirely back for A Dame to Kill For because two of the four stories told in the sequel happen before his tale “The Hard Goodbye” in the first movie. If you were looking at a timeline, two of the four Dame stories are prequels, the other two are sequels. The first movie told three separate stories by breaking them into various chunks, yet the movie completely functioned as a whole. A nice stand-alone pair of bookends opened and closed the picture and the editing of the storylines fluidly pieced them together for a very solid triple feature, of sorts. This is where A Dame to Kill For lacks – but on one of the specific storylines only.

A Dame to Kill for kicks off with a short intro story, but not one that will bookend and close out the film – like “The Customer is Always Right” did in the first movie. It’s a basically a short and sweet segment with Marv doing what he does best – tearing things/people up. We then get the first half of “A Long Bad Night,” a new story which Frank Miller wrote exclusively for the film. Joseph Gordon-Levitt plays an always-lucky gambler who doesn’t know how to lose – but his luck might have run out tonight. Halfway through, we jump to the titular “A Dame to Kill For” storyline. This one is a prequel to Clive Owen’s story in the first film. Josh Brolin stars as Owen’s character Dwight. The reason for Brolin taking over in the role is justified in the comics, but it’s a minor SPOILER ALERT, so beware and don’t say I didn’t warn you: at one point in “A Dame to Kill For,” Dwight needs to disappear, so he gets reconstructive facial surgery and goes from Brolin to Owen. Makes sense, right? Well, it doesn’t in the movie. The problem lies in the fact that Owen, for some reason, isn’t in A Dame to Kill For, so after Dwight has the surgery, he doesn’t look like Clive Owen. Instead, he looks like Josh Brolin with a silly wig. Not only that, it’s never explained that he had facial surgery, he simply shows up with a wig and the audience is completely lost. Had I not read the comics and known this, I would have been lost too. But had Owen returned to play Dwight, all of the tumblers would have fallen into place and balance would be restored to the Sin City cinematic universe. END SPOILER.

The “Dame to Kill For” segment of the movie is where all of my qualms with the sequel lie. It’s too long. Unlike the longer tales told in the first movie, this one’s not edited down for the film adaptation. Also, while the first movie had loads of scantily clad women, the sex and nudity was at a minimum. In “A Dame to Kill For,” it’s blown out of proportion. Eva Green, who plays Dwight’s ex, Ava, literally spends more time fully nude in the film than she does clothed. It’s overkill. Gratuitous. This isn’t supposed to be like one of Rodriguez’s intentionally bad Machete movies; it’s supposed to follow suit with what he did in the first film, which was replace a lot of comic book nudity with live-action lingerie. Even if you don’t care about sex and nudity in film, you’ll get burned out on the excessiveness of what’s found here.

When the first Sin City was released on DVD (and later on Blu-ray), an edition was put out that contained the extended versions of the  storylines. They weren’t edited into one movie, but could be watched story by story. I’m hoping that A Dame to Kill For is released with a similar edition, that way I can refrain from having to watch the “Dame to Kill For” segment ever again, which still getting to the other goods that lie in the sequel.

After “A Dame to Kill For,” we go back and see the second half of Gordon-Levitt’s “Long Bad Night,” which is followed up with another original story that was exclusively conceived for the sequel. “Nancy’s Last Dance,” which actually chronologically follows the ending of the “Long Bad Night” story, explains what has happened to Nancy (Jessica Alba) since the end of her story in “That Yellow Bastard” in the first Sin City movie. She hasn’t taken things well, so she’s now spiraling out of control into a revenge-filled drunken madness that can only be cured by killing the man whose immoral and corrupt actions have shattered her life on two separate occasions. I have no complaints with what happens here. It’s a great extension of what we saw in the first film.

Knowing the comics and first movie very well, I was able to follow along with and enjoy A Dame to Kill For – but I’m certain that anyone who isn’t as “educated” as I am in the ways of Sin City will be completely lost at times. I have several friends who love the first film as much as I do, but don’t know the comic books at all. They saw A Dame to Kill For and were not only lost, but so disoriented from it that they couldn’t see the ways in which it succeeds. Personally, this is a film that I’d like to give a great review, but if I tell moviegoers that they have to first purchase and read “A Dame to Kill For” and then re-watch the first movie prior to seeing A Dame to Kill For, how can I give it a solid recommendation? For that reason, I’ll give it two ratings. For those who know and the love the comics, A Dame To Kill For gets four stars out of five; it’s awesome and fun, but lacks editing and continuity. For those who don’t know the comics, which is the vast majority of moviegoers (which is why my main review gets this rating), I give it three stars out of five; A Dame to Kill For is confusing and unexplained, but at least it’s pretty, stylized and fun.