Edgar Wright has concocted a world of complete originality and imagination. "Scott Pilgrim vs. The World" is just freaking fun! Made for everyone should like this movie, sadly it may see a limited audience because of its hardcore geeky nature. 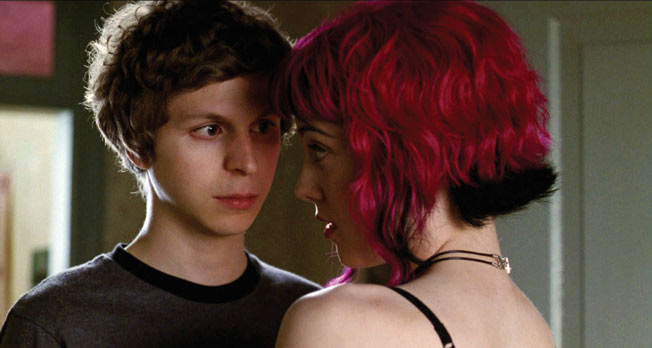 In some twisted way Scott Pilgrim vs. the World reminds me of the neo-noir Brick with Joseph Gordon-Levitt. Brick went, full steam ahead, for a high school noir drama complete with dialogue that confused the masses. Brick is more like an experience than a movie. Kudos to the filmmakers for going for something that made it original. So why does Scott Pilgrim remind me of Brick? Because Edgar Wright, director of Shaun of the Dead and Hot Fuzz, has outdone himself here with a movie so original and fresh that it feels like it shouldn’t have come out of Hollywood.

More often than not we head to the movie theaters nowadays to see an action film or a romantic comedy and halfway through it we realize, we’ve seen this film hundreds of times before. Movies are being recycled at a break-neck pace and that’s what makes a movie like Scott Pilgrim so exciting.

Adapted from a comic book, Scott Pilgrim vs. the World centers around Scott Pilgrim (Michael Cera) and his quest to win the heart of Ramona (Mary Elizabeth Winstead). The catch is when he starts dating Ramona he quickly finds out that she has a past full of relationships gone wrong. So wrong in fact, that Scott must duel each one of Ramona’s exes in battles to the death.

Scott Pilgrim plays out like a video game, complete with pixilated graphics, music from Zelda, and my personal favorite throwback to the Mario games with Scott’s band being named The Sex Bob-ombs (for those of you that don’t know Bob-ombs are the disgruntled bomb guys in the Super Mario games that try and blow Mario up). Everything about this movie screams geek central, but that’s where it excels even more. Instead of being a movie where geeks of all ages can come and geek out about video game and comic book references, Scott Pilgrim contains some witty writing that will make you have to watch the movie over and over to get every sly piece of humor. Of all things there’s a Seinfeld reference that had me rolling with laughter.

Wright crafts a movie that rivals his other witty films like Hot Fuzz. He packs the film full of references and even sees fit to make each and every ex that Scott defeats explode into a shower of coins. Does it make sense? Yes it does, in a video game world. With each and every new video game release we keep hearing that video games are becoming more like movies with their complicated plots, but Scott Pilgrim has turned the tables with a movie that is more like a video game. And not just any video game, an old school video game.

Wright knows his way around clever humor and Scott Pilgrim is packed full of it. Sadly its premise and look may keep a lot of people away thinking this is just a movie for teenagers. This really is a movie for people who love going to movies. For people that are still holding out hope that there’s originality left in this world. For people that enjoy films that make them genuinely laugh. This is a film that may scare some people because it looks like a video game, but it’s a film that everyone should see. Just like Brick, Scott Pilgrim jumps headfirst into something that hasn’t quite been done before and, on sheer bravado, it scores.