Ricki and the Flash

Streep never disappoints, but there’s nothing here for casual moviegoers. Made for streep fans who are looking for something a little different than her usual Oscar bait and adults in the mood for a decent dramedy. 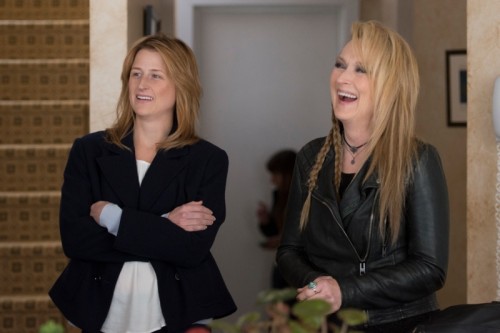 I suppose it should come as no surprise that even screenwriters can be one-hit wonders. Ever since Diablo Cody burst onto the scene with her Oscar-winning debut Juno, she’s just never been able to recapture that lightning in a bottle. When it was announced her follow-up was going to be a horror-comedy, I was ecstatic since I love horror films and could watch Juno on repeat. Unfortunately, director Karyn Kusama had no idea how to handle Jennifer’s Body’s script, and to make matters worse, cast the always dreadful Megan Fox — even if the idea of her as a bitchy high school succubus made perfect sense.

Young Adult showed a glimmer of hope, but still never lived up to expectations, and her directorial debut (Paradise) is ironically her worst film. So, how does Ricki and the Flash measure up considering she has Meryl Streep reading her words and Jonathan Demme handling the reins? About what you’d expect, moments work here and there, but both have definitely seen better days. We just expect more from the man who gave us The Silence of the Lambs, Philadelphia, and Rachel Getting Married.

Ricki (Streep) plays with her band The Flash in Tarzana, California, that includes a love interest in her guitar player Greg (Rick Springfield). She gets her kicks playing in a dive bar at night, while dealing with being a grocery cashier by day. One day she receives a call from her ex-husband Pete (Kevin Kline) who informs her that their daughter Julie (Streep’s real life daughter Mamie Gummer) is getting a divorce. Ricki jumps on a plane to Indianapolis, to face the dysfunctional family she left behind to become a rock star.

If there’s one word to describe Ricki and the Flash, it’s meh. We’ve all seen the countless biopics and dramas revolving around would-be rock stars having to come home and face the music. Thankfully, while the screenplay may only feature the tiniest spark that it came from Cody, there are some laugh out loud moments scattered throughout. However, Cody also seems to think that 30-year-olds use the term “cray cray” which is just ridiculous. Keep the verbal schtick to your teenage characters, Cody. Ricki also never falls into the melodrama trappings — you won’t need any tissues.

But, you may find yourself dying to check your watch more often than usual in a dramedy. The cast keep things bouncing along while Ricki is in Indiana, but as soon as she heads back to California, the film hits a roadblock. The family scenes work best and there should have been more. Streep and Kline have great comedic chemistry together, and Gummer shows she can hold her own against her mother. Anyone who may have noticed the Winter Soldier (Sebastian Stan) in the cast will leave disappointed, however, this is the most likeable he’s been so far. Except that he’s saddled with his bitchy fianceé Emily (Hailey Gates), who seems way too good for the part.

The only people I can see getting the most for their ticket prices would be hardcore Streep fans, but they won’t find her typical Oscar bait here. While never disappointing, there’s nothing here for casual moviegoers. The August release date should honestly tell you everything you need to know about Ricki and the Flash. This is been-there-done-that entertainment at its most forgettable. Something that should never be said about something with Streep in the lead — which may be the saddest news of all.