Quick, wicked, hilarious, and gross. Ready or not, don't spoil the ending! Made for black comedy and horror fans.

Rated R for violence, bloody images, language throughout, and some drug use. 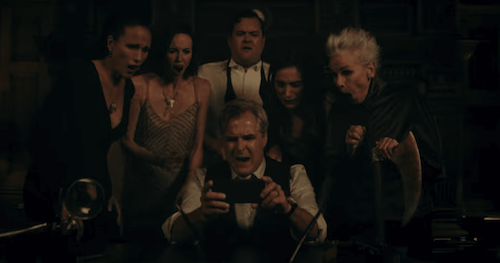 Sometimes going into a movie blind can be wonderful. When that movie finally manages to deliver on its ending, it makes it even better. Endings have been a very sore subject for modern horror. They leave on a sour note and never deliver the goods. Such is not the case with the new horror comedy, Ready or Not. Directors Matt Bettinelli-Olpin and Tyler Gillett (aka Radio Silence) set up the scenario in the first scene, and carry through to the big finale. With a likeable cast, and an ending that’s best not spoiled, a new cult classic is on the rise.

Grace (Samara Weaving) is about to marry the love of her life, Alex Le Domas (Mark O’Brien). Heir to the Le Domas gaming empire, Alex is far more worried about their impending nuptials than Grace. He propositions her with an out, offering for them to run for the hills once they’ve wed, but Grace is all in. Little does she know, come midnight, the family will gather in the game room where Grace draws a card to play hide and seek. Now, she comes face-to-face with the realization that the Le Domas plan to hunt and kill her, in a time honored tradition of the utmost satanic superstition.

Bettinelli-Olpin and Gillett make the most of Guy Busick and R. Christopher Murphy’s wicked screenplay. Even if the tone can sometimes feel a little scattershot. There are times where things are played completely straight and the film starts to take itself too seriously before jarringly coming back to the hilarious black comedy tone that works best. Weaving makes for a fantastic newlywed up to her neck in piling bodies, while everyone else — particularly Adam Brody and Andie McDowell as Alex’s brother and mother — get a few chances to try to steal the spotlight.

Blood and hilarity are par for the course — it’s particularly hilarious who the first few people to die are, and how. And the story keeps hinting at some pretty over-the-top plot mechanics. Lucky for us, as soon as it looks like the directors are about to pull their punches, the action kicks into hyperdrive and saves the day. There’s also a nail hit right on the head involving Nat Faxon as a customer service agent named Justin that could be used in many customer service training videos if it weren’t for the expletives.

At a scant 95 minutes, the film also doesn’t wear out its welcome. Here’s hoping Disney keeps allowing Fox Searchlight to deliver on the quality we’ve come to expect after 25 years. Ready or Not, this is one horror comedy that deserves to be seen in a theater full of fellow gorehounds that completely delivers on all counts. Just make sure to not ruin the ending.