Rated R for some sexuality and nudity. 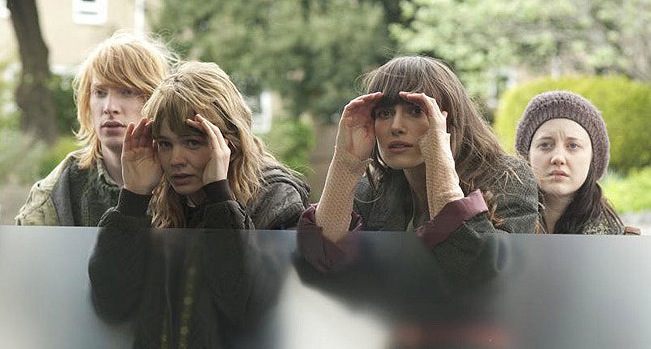 Never Let Me Go is a gem-of-a-film. While it is nothing huge, it will leave an impression on you, giving you something to think about and analyze for days.

This is Kathy’s story. She begins telling it from her earliest memories at an odd English boarding school. Kathy (Carey Mulligan, Wall Street: Money Never Sleeps) wasn’t like the rest of the children. She was a deeper person, constantly thinking and longing for more. She knew that something was missing from her life. Although life at school is calm, there is something unsettling about it.

Kathy really only has two friends: Tommy and Ruth. Much like Kathy, Tommy (Andrew Garfield, The Social Network) is sort of a loner at school. All of the other boys pick on him because he isn’t any good at sports, although he definitely tries. The bond between Tommy and Kathy resembles a childlike romance. Their friendship is definitely stronger than the one between Kathy and Ruth. While Ruth (Keira Knightley, Pirates of the Caribbean) is beautiful and popular, it is obvious that she is jealous of Kathy – especially for having all of Tommy’s attention. Because of that, she eventually pushes her confident self on Tommy and as the two get older, they begin dating, making Kathy the third wheel.

When the school hires a new young teacher (Sally Hawkins, Happy-Go-Lucky) that morally objects to the school’s purpose, the unsettling truth about the children’s existence comes to light – these children are all clones who will have their organs harvested as young adults. They will continually make “donations” until they “complete” (or in other words, die).

One Hour Photo director Mark Romanek matches the beautiful symbolism of the story with symbolic breathtaking imagery. Mixing his strong-yet-subtle directing style with a fantastic script from Alex Garland (28 Days Later, Sunshine) and awards-worthy performances from Mulligan and Garfield creates a stunning combo of fine filmmaking. For those who enjoy good film, Never Let Me Go is one you wont want to miss.