Life As We Know It

Better than it looks, "Life As We Know It" is most entertaining when it strays from the first-time parenting and romantic dramedy cliches. Made for fans of slightly better than average romantic comedies.

Rated PG-13 for sexual material, language and some drug content. 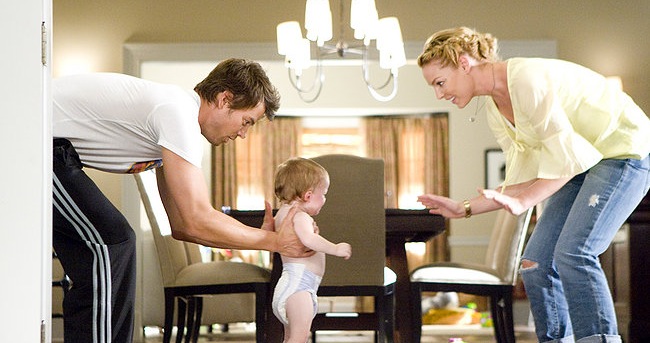 The trailer for Life As We Know It spells out the entire movie. It is the road they take getting through it that makes it worth seeing.

Although it is not a fantastic film, Life As We Know It is better than expected. Holly (Katherine Heigl, Killers) and Messer (Josh Duhamel, Transformers) don’t along. But they have to. Holly’s best friend married Messer’s best friend. Despite hating one another, any time there is a friend or family gathering, Holly and Messer constantly nag at eachother like a bickering old married couple. You see, Messer is a womanizer who lives by the seat of his pants, enjoying life to the fullest, and Holly is a reserved, organized and strong-willed woman who has left childish things behind. But, like Paula Abdul put it, “opposites attract.”

When Holly and Messer’s best friends are killed in a car accident while on a date, their one-year-old daughter Sophie is left an orphan. Unbeknownst to them, the deceased couple’s will left Sophie in their joint care. Now, Messer and Holly must live together and raise a child even though they despise one another. As the begin to have “first times” together – first time changing a diaper, first time walking, etc. – Holly and Messer realize that they are creating a relationship backwards. Some romantic moments ensue.

For anyone dreading Life As We Know It – much like I was – know that it is not as bad as it looks. If you can ignore the typical storytelling faults in a romantic comedy, then you will enjoy everything else it has to offer. The best element to Life As We Know It is its honesty. When the relationship starts to flourish between Holly and Messer, those genuine moments achieve a level of honesty that is usually absent in mind-numbing rom-coms. And although she was just as annoying as ever in the first half of the movie, Heigl actually becomes a likable on-screen character. You will enjoy watching Heigl and Duhamel together.

Don’t get me wrong – I am not saying that Life As We Know It is some praiseworthy film. It is simply a better movie that you would expect after seeing its trailer. Life As We Know It is the type of chick flick that works just fine for date night – the ladies will be excited that their men took them to a romantic comedy for once and the guys will actually enjoy it. It’s a win-win situation.