A bullied kid meets a young girl who is a vampire and they form a bond. Made for horror fans should love it, even though it isn't in your face with its scares. 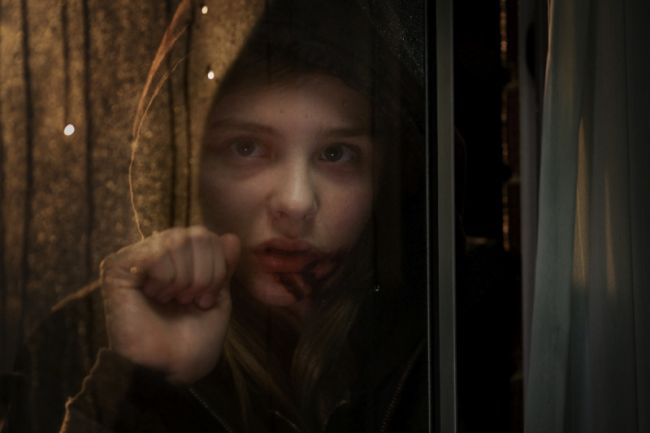 Let Me In is an American remake of a Swedish horror film that came out last year called Let the Right One In. It’s the story of a young boy named Owen who gets picked on at school by a trio of relentless bullies. He’s an only child and he lives with his mother who is separated from his father. Owen is scrawny, pale, and unassuming.

One day a young girl moves in next door named Abby. It’s snowing and cold outside, but Owen realizes she isn’t wearing any shoes. As a matter of fact, she never wears shoes. She tromps around in the snow without getting the least bit cold. Abby lives with what we assume to be her father.

If you’ve seen Let the Right One In or any of the commercials for Let Me In you know that Abby is actually a vampire. This isn’t a spoiler, because it isn’t something that ruins the movie if you know. You’re supposed to know she’s a vampire. The movie is about how a vampire like Abby deals with life in the real world. Her “father” or more aptly her guardian has to go out every so often and kill someone in the town in order to satiate Abby’s thirst for blood.

Abby and Owen are kindred spirits, both of them feel down and depressed about their circumstances. They make a perfect couple.

With any remake worry sets in, and we wonder if the filmmakers are going to do the original justice without just remaking the movie shot for shot. For the most part, director Matt Reeves (Cloverfield) does this. Let Me In keeps the slow, deliberate nature of the original film. Abby and Owen hardly talk to each other; much of their time talking is spent in one word answers and thoughtful staring.

The problem is if you’ve seen the original there’s absolutely nothing new here. You know what’s going to happen, when, and for what reason. The movie’s brooding ambiance does a great job at sucking you into the story with its overall dour mood, but there are no surprises. Maybe that’s a good thing that Reeves saw fit to keep pretty true to the original film, which is based off of a book.

Let Me In is perfect for people who have yet to watch Let the Right One In. It will still hold some fantastic scares, and a plot that is thrilling and sweet at the same time. Sadly for fans of the original you’ll see everything coming a mile away, and the same mood that was created in the first one is replicated here. Also, there are a few added in CGI scenes that completely pulled me out of the movie. I realize that the original had a CGI cat scene which was downright silly, and that pulled me out of the movie too. I don’t know why Reeves thought it best to take a movie that tries so hard to not be a conventional horror film and then turn around and add conventional horror elements like herky-jerky CGI of a little vampire girl attacking someone or crawling up a tree.

Let Me In is a good horror flick, much better than the impractical jump-out-and-scare-you movies like The Grudge that we always end up getting around this time of year. Don’t let the trailers on TV fool you, Let Me In isn’t your regular run-of-the-mill horror film. People going to it expecting epic vampire bloodbaths are going in with the wrong mindset. This movie is about two kids trying to overcome their dire situations and the only way they can do it is together.