Paciencia y fe make the wait worth it for the year's biggest explosion of fun. Made for fans of the Broadway version, musical fans, and anyone just needing an escape back to the theater.

Rated PG-13 for some language and suggestive references. 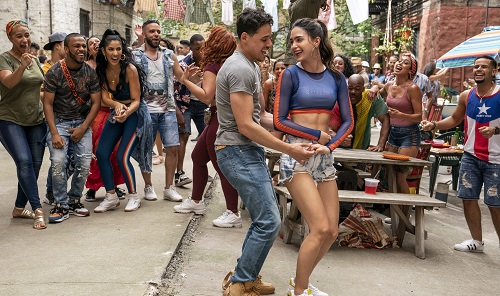 In an odd bit of prophesying, and preparation for writing my review of In the Heights, I read my review of director Jon M. Chu’s Step Up 3D. Here are some fun snippets:

While I have not seen Chu’s Step Up 2, it’s safe to say his dues have been paid and Chu has finally been given the chance to unleash the next great Hollywood musical upon us with In the Heights. Overflowing with the kind of big screen musical spectacle not seen in ages, this is the spectacular spectacular we deserve. Way more fun than even The Greatest Showman and could be handed a Best Picture Oscar right now in comparison to Cats. The pandemic wait was more than worth it with Chu adapting Lin-Manuel Miranda and Quiara Alegria Hudes’ Tony-winning Broadway musical with wild ambition.

Our narrator, Usnavi (Anthony Ramos), sits down with a quartet of kids to explain sueñito, along with the story of Washington Heights, New York City and all of the community’s little dreams. Mainly, we focus on Usnavi, who dreams of returning to the Dominican Republic, whisking his nephew, Sonny (Gregory Diaz IV) along for the ride, while pining over Vanessa (Melissa Barrera) who longs to be a fashion designer with a loft she can call her own. Also, we see the return of Nina (Leslie Grace) from Stanford, who has come home to explain to her father, Kevin (Jimmy Smits), that she’s dropping out, while reacquainting herself with her ex, Benny (Corey Hawkins). Did I forget to mention that someone also has a $96,000 winning lotto ticket floating around?

It’s a shock to think In the Heights has spent almost a decade in one form of development hell or another. The success of Hamilton skyrocketed Miranda to the spotlight over the years, but Heights is a much better musical. While not the rock opera some may be expecting — I thought it would be — it’s far more traditional. But with the expansion of on-location shooting, the film gives the Broadway smash the chance to soar to all new, well, heights. “96,000” is a showstopper set amidst the Highbridge Pool — the first time a crew was allowed to shoot there —- while other standouts include the opening sequence, the final Benny/Nina number, and the neighborhood Abuela’s (Olga Merediz) heartbreaking lament.

Considering In the Heights was originally a stage production may make some weary of the runtime, but make no mistake, this thing flies by. Amazing choreography, blaring horn sections, Alice Brooks’ incredible cinematography combined with Myron Kerstein’s razor sharp editing, and a cast having the time of their lives, this is the summer party you do not want to miss. It also manages to sneak in a couple of cameos, in-jokes, and a post-credit scene. While it may be releasing simultaneously in theaters and HBO Max, this was meant to be seen on the big screen. The option to revisit from home is convenient, but it absolutely demands to be seen in a theater first if possible.