Boring and humorless, avoid at all costs. Made for parents in desperate need of a babysitter.

Rated PG for mild action and some rude humor. 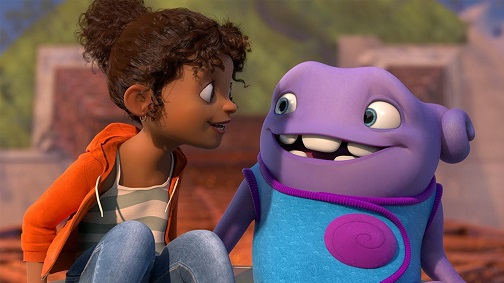 As DreamWorks attempts to be the powerhouse that even Pixar has trouble maintaining, their latest ventures have fallen somewhat flat. While still managing to crank out hits in their franchise departments, for every How to Train Your Dragon or Kung Fu Panda, or even Penguins of Madagascar, they still stumble with original properties. And their new Home, based on Adam Rex’s The True Meaning of Smekday, is their biggest failure in years. Director Tim Johnson comes nowhere near the hilarity he provided with Over the Hedge, and this is way worse than people thought Mr. Peabody & Sherman was.

Home refers to Earth, which has just been taken over by aliens called the Boov. Lead by their leader Captain Smek (voiced by Steve Martin), they relocate all humans to a desert planet, while others have been placed in Australia. The most excited about their new home is Oh (voiced by Jim Parsons), who is excessively optimistic and a burden to his species as he’s always flubbing something up. The last remaining human, Tip (voiced by Rihanna) is on the hunt for her mother (voiced by Jennifer Lopez). The two wind up cohorts after Oh accidentally reveals their location to their mortal enemy the Gorg, via evite, and now Oh must help Tip find her mom and stop the Gorg from destroying the planet.

If that sounds like lazy writing, you’re right. The screenplay from Tom J. Astle and Matt Ember is extremely dated. It’s almost as if a time capsule was found with the script inside and they just blew off the dust and proclaimed, “Eureka!” Filled with references to the likes of Busta Rhymes — which kids won’t get in the first place — Home is a film made for nobody at this point in time. Not to mention that it’s completely humorless, making the runtime feel like an eternity.

As for the cast, Parsons is aping his loveable Sheldon from The Big Bang Theory, but merely hearing his jubilant delivery without watching him in action just makes him grating. Rihanna never sounds close to playing a girl in her teens, and poor Steve Martin is relegated to voicing the dumbest character of his career. I have no idea why JLo is even getting billed as she has maybe 10 lines in the whole movie. Oh wait, that’s because the soundtrack is filled with a nauseating overuse of songs by her and and Rihanna. Home has no heart, no laughs, and seems completely aimed at selling copies of the soundtrack.