A beautiful, and poignant story about three separate people looking for answers about the afterlife. Made for people who enjoy Eastwood's brand of methodical directing. 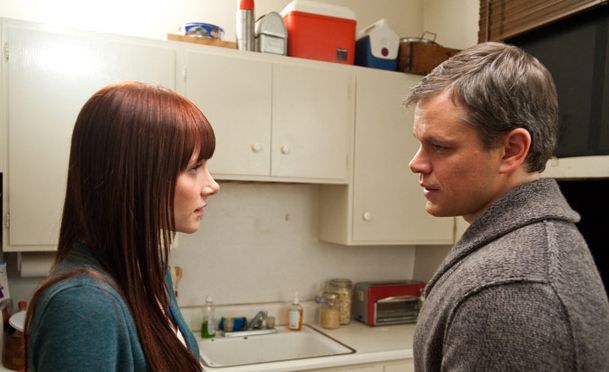 Hereafter almost assuredly is a movie that could only be made by Clint Eastwood and still receive a wide release. If anyone else attempted to make this same exact movie without Eastwood’s clout, this one would end up with limited releases in a few art house theaters across the country. Lucky for us though, Eastwood is a machine when it comes to making thoughtful, soulful, dramatic pieces that explore the human condition. This movie is being marketed with trailers that make it look like a thrill-filled, psychological mind-bender. If that’s what you were expecting then prepare for something much different.

It’s true, the movie starts off with a scene so breath-taking and so humongous in scope that you have no choice but to be drawn into the movie by force. It’s a lazy, sunny day in an island town somewhere in Southeast Asia. A French reporter named Marie (Cécile De France) wakes up in her hotel with her husband. She heads out to the street market to buy a few gifts for the kids back home. Her husband wakes up just in time to see the ocean as it slowly crawls back onto itself. The water moves back further and further, and then there it is, a gigantic tidal wave bearing down on the small town and luxury hotel. It swallows up guests as they run from it. It smashes into small buildings, demolishing them. It sweeps down the city streets sucking up cars, trees, power lines, everything. Marie is swallowed up in the raging torrent, and ends up nearly drowning. She has a near death experience. She sees something. Another world, populated with people but she can’t really make out their faces. All she knows is that world is there.

The movie follows two other tales. In England a set of young twins, Jason and Marcus, have a drug addict for a mother. Child services are threatening to take the two of them away. They try and mask the problem as best they can, because they don’t want to leave their mother or each other. When Jason is killed by a car, Marcus finds himself lost. His brother was everything to him and now he’s gone. Marcus searches for answers about where his brother has gone and why he isn’t coming back.

Lastly we have George Lonegan (Matt Damon) who has a real, honest-to-goodness ability. He’s a psychic, but he doesn’t want to be. He wants to be normal, just like everyone else. He’s never had stable relationships, because with his power comes the knowledge of what has happened to people in the past. What secrets they’re carrying around in their closet. He’s lonely, and finds himself immersed in Charles Dickens stories read-aloud on a CD as he tries to fall asleep.

This movie has Eastwood’s stamp all over it. After the feverish beginning, the movie settles down into a character driven piece that has three separate people trying to understand what happens after we die. It never feels preachy or conceited, instead this is a world where real psychics do exist, there is some sort of afterlife, and connections can be made with people beyond the grave.

Eastwood never gives us more than a few glimpses of this afterlife that everyone is talking about. This isn’t like The Lovely Bones where spirits go to frolic around in serene CGI landscapes. Instead Eastwood makes a conscious decision to withhold a lot of the afterlife information from us and from his characters. Even George, who has connected numerous times to people beyond, finds himself at a loss when he tries to explain what it’s like.

The movie moves slowly, which might put off quite a few viewers. In the screening I saw people began fidgeting, no doubt wondering when something big like the tidal wave was going to happen again. This isn’t that type of movie. Eastwood takes a daring leap here, in today’s box office which is crowded with high-octane action flicks, and tells an introspective story about life, love, and death. This isn’t a movie for everyone, but in my opinion everyone should see it.