You know a shark movie has failed when even I can't love its 'Jaws: The Revenge'-level ridiculousness. Made for only the most hard-pressed shark movie fans.

Rated R - not rated, but would be R due to language and shark violence. 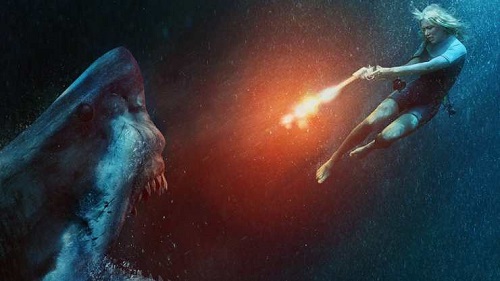 If there’s one thing I love, it’s shark movies. (Jaws is my all-time favorite film.) Suspension of disbelief is key when it comes to this genre. Sometimes, not even that is enough to sustain a full 90 minutes. They can’t all be Jaws, Bait, The Shallows, or even The Meg, but when it shares more in common with Jaws the Revenge, and takes itself so seriously it teeters on parody, something has gone awry. Such is the case with Great White, a film so ridiculous it’ll be surprising how many viewers make it through the whole thing. You could say, it, well, jumps the shark.

Kaz (Katrina Bowden) and Charlie (Aaron Jakubenko) just want to keep their seaplane tour business afloat with the added news of Kaz expecting a baby. As if that wasn’t enough to celebrate, along comes a new couple to throw business their way — Joji (Tim Kano) and Michelle (Kimie Tsukakoshi) — and they set off for Hell’s Reef with their cook, Benny (Te Kohe Tuhaka) in tow.

Once they arrive, Michelle explains they came to spread her grandfather’s ashes, but soon enough, she finds the dead body of a man bitten in half. Now, they attempt to find the man’s missing yacht, in case they can happen to help save a woman seen with the dead man in pics on his phone. And just wouldn’t you know it, the same shark is still on the loose, sinks the plane, and strands everyone in a rubber raft, hoping to make it back to shore while the script slips into Agatha Christie mode.

A few of the more dunderheaded moments in Great White include, but are not limited to: the shark attacking the plane, but not the life raft; Joji’s rage-fueled character that’s never explained; how little effects UV has while in open water; and a hilarious plan to stab the shark in the head — if it gets close enough. Oh, the shark also seems to roar at one point — it may have been more of a bad timing with the score, but I still heard it. And just drives home the Jaws the Revenge-level of ridiculousness.

Most of the cast do what they can with the material — Kano is particularly obnoxious and you may cheer when he’s finally eaten. But there’s never any moment of true suspense, and it’s never good when you start rooting for the shark. If anything, Great White could serve up an opportunity to have friends over for drinks and laugh at the shenanigans, but even as a streaming option, there are so many alternatives, only the most hard-pressed shark movie fans should bother.