Ghost in the Shell

Boring, even if pretty to look at. If you've seen any sci-fi movie in the last 40 years, you've seen this. Made for only the series' most salivating fans. 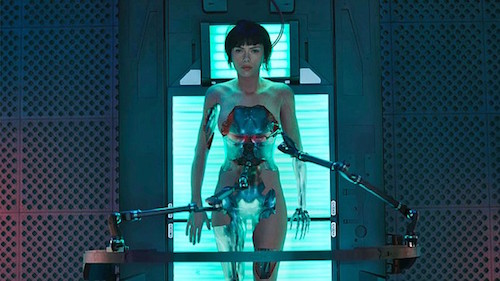 It doesn’t help that the three credited screenwriters — Jamie Moss, William Wheeler, and Ehren Kruger — have somehow managed to suck any kind of humanity out of Masamune Shirow’s story. For a film about a woman losing her identity and trying to find her new place in the world, you sure never give a damn for a second. It doesn’t help that this is an absolute bore.

In the future, Major (Scarlett Johansson) has been brought to life in a new body. Told she was rescued from a sinking refugee ship, her brain has been transplanted into a robot — something that’s never been done before, while robotic enhancement is all the rage. Dr. Ouelet (Juliette Binoche) keeps Major’s body in tip top condition after spending her time as a counter-cyberterrorist agent getting beat up.

Lucky for her, Batou (Pilou Asbæk) is her right hand man, helping to save her during a deep dive — think a Matrix version of Get Out’s “sunken place” — where cyber hacker Kuze (Michael Carmen Pitt) begins his recruitment of Major after installing some new memory. Meanwhile, Major’s boss, Aramaki (‘Beat’ Takeshi Kitano) has his sights set on a more human target, Cutter (Peter Ferdinando).

Anyone bored to tears after reading through that synopsis is bound to be even more bored by Sanders’ lackluster direction. While he does take time to keep some iconic shots from the classic anime and comic, you never care for anyone’s plight — especially Major’s. Anyone crying about the whitewashing of another fan favorite need not worry, they threw in an excuse you’ll see coming a mile away. But it doesn’t make up for the rest of the dismal direction. Scene after scene plods on while you’re left wondering what happened to the action film Paramount’s marketing team has been feeding us for months.

Johansson sleepwalks her way through, while no one around her even bothers to chew any scenery, which at least could have helped perk up the tone. The only one who comes close to having a shining moment is Aramaki, but what else would you expect from Kitano. The man can be a badass simply sitting in a chair doing nothing.

My guest did enjoy it far more than I did, and considering he’s a fan of the material may warrant enough of a recommendation for those who have been waiting for this to finally hit theaters. It feels like everyone has some kind of big picture we’re drooling over in anticipation — mine are both The Dark Tower and It. So for those wanting to see Ghost in the Shell, you should leave satisfied. As for anyone unfamiliar, you’re best waiting it out for the next actual action film to come along, because this absolutely is not for the rest of us.