Never mistakes itself for high art, the franchise continues to steamroll ahead in all its audaciously over-the-top glory. Made for fans of the 'Fast Saga' and anyone who loves to turn their brain off for 2 1/2 hours.

Rated PG-13 for sequences of violence and action, and language. 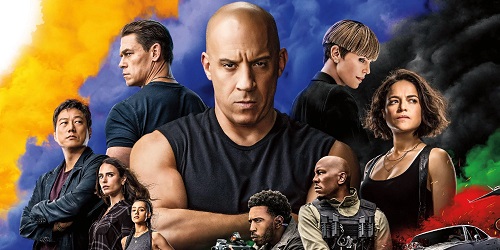 Universal’s beloved Fast and the Furious franchise will never be considered fine art. With director — and now co-writer — Justin Lin back in the driver seat for his fifth outing, no matter how much things change, at least these films remain the same. And who doesn’t love a big, dumb, action movie these days — especially up on the big screen? Full of spectacular action, impossible stunts, and over-the-top shenanigans, F9 has arrived to remind us of just how big and dumb these movies can be. And that’s exactly why we love them.

The “F” in F9 could stand for quite a few things, but the biggest culprit would be flashbacks. There are way too many Dom (Vin Diesel)/Jakob (Dom’s brother, played by John Cena as an adult and Finn Cole in his teens) flashbacks that could easily be summed up in various lines of dialogue. Oh wait, there is, but then we’re stuck enduring yet another flashback. When you’re on the ninth installment of any franchise — especially one that has yet to be rebooted — do we really need this kind of filler? No one cares about Dom’s troubled past anymore, let alone need to sit through it. But, well, in case you didn’t ask, here comes another one…

It’s 1989 and Dom witnesses the death of his father, Jack (JD Pardo), in a grisly car crash during a race. In the present, we learn that Mr. Nobody (Kurt Russell) is missing or dead, but his SOS signal brings the family back together again to find two halves of a device called Aries that Jakob is using Cipher (Charlize Theron) to find. Now, everyone, and I do mean everyone — Dom, Letty (Michelle Rodriguez), Mia (Jordana Brewster), Roman (Tyrese Gibson), Tej (Ludacris), and Ramsey (Nathalie Emmanuel) — as they globetrot in a race against time to stop Jakob from finding Aries which can hack into any computer weapons system. Hilarity ensues.

Not to sound like a hater — absolute opposite — I loved every ridiculous minute of it that wasn’t another Dom flashback. What makes the flashbacks so annoying is that Diesel is having more fun than usual, so why make them so serious? Just let the good times roll — that’s why we’re here! Thankfully, Lin is always ready to cut to the chase and high tail it to the next action sequence. The cast continue to do what they do — love it or hate it — and perform exactly as expected. Dwayne Johnson and Jason Statham’s presence is sorely missed, but we do get more fun with Helen Mirren, and the return of Sung Kang, Lucas Black, Shad Moss, and Don Omar. Sadly, Charlize Theron and Kurt Russell never amount to more than cameos.

Cars go fast, cars go boom, one-liners fly, and now, so do the cars. F9 is everything we’ve come to love from the franchise and proves there’s no slowing them down. Considering they’re already gearing up to shoot entries 10 — which better be titled FasTen — and 11 back-to-back, I can’t even imagine what Lin and the “Fast Family” have in store next. They went to space in this one.  Intentional — and unintentional — laughs abound as the insanity races to its climax. F9 works overtime to ensure audiences get their money’s worth and is a fantastic way to usher back the summer season and is absolutely worth checking out on the biggest and loudest screen possible.