A made-for-TV movie on the big screen. Made for fans of sappy, heart-warming, feel-good movies. 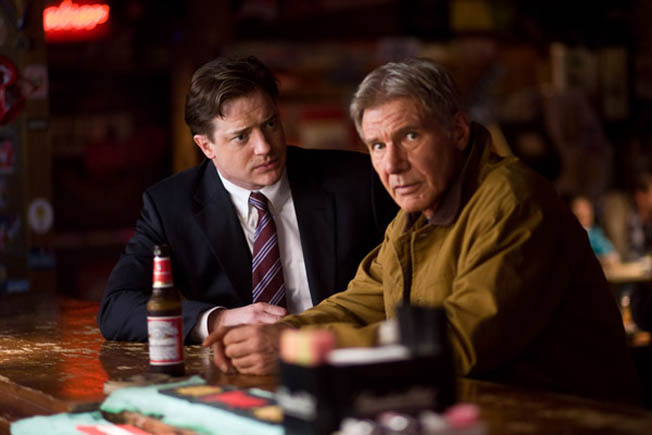 I’m pretty sure this is dialogue happened when the CBS executives behind Extraordinary Measures were putting the movie together:

Producer #1 – “I think we have a pretty good made-for-television movie here.”

Producer #2 – “I agree. We’ve got Brendan Fraser cast as a lead after all!”

Producer #1 – “I know! It’s great! Who do you think we could get to play the supporting role?”

And when Harrison Ford actually accepted the role, they were forced to put it on the big screen. The end result is a poorly crafted movie fit only for television.

Although the film is based on a true-story – a story that is pretty incredible and powerful – the way it is told and made takes the heart and emotion right out of it.

Extraordinary Measures tells the story of a father (Fraser) willing to do whatever it takes to find a cure for a form of autism known as Pompe Disease, a disease that two of his three children have. As both sick children get closer to the age of mortality, their symptoms worsen, so their father takes a lea of faith, quits his job and searches for a miracle at the hands of a little-known doctor (Ford). The majority of the movie is spent showing you how they financially put his untested theoretical research into practice to the point where they could start a clinical trial.

Just like most feel-good movies, after only seeing a few minutes of the movie, you know exactly where Extraordinary Measures is going to end. The typical clichés in character and plot are all there, making it a gruelingly long and painful experience. Instead of unraveling in a heart-felt manner, from the movie’s opening sequence, it’s overly manipulative.

If you are in the mood for a sad-yet-hopeful movie about trials involving families and disease, I suggest you rent My Sister’s Keeper – although it’s got some corny moments, it’s a far more emotion and powerful movie without all of the unnecessary manipulation.