Diary Of A Wimpy Kid

Perfectly capturing the awkward stage between elementary and high school, childhood and adolescence, Diary Of A Wimpy Kid isn’t a place you want to spend much time. Made for middle school-age boys. 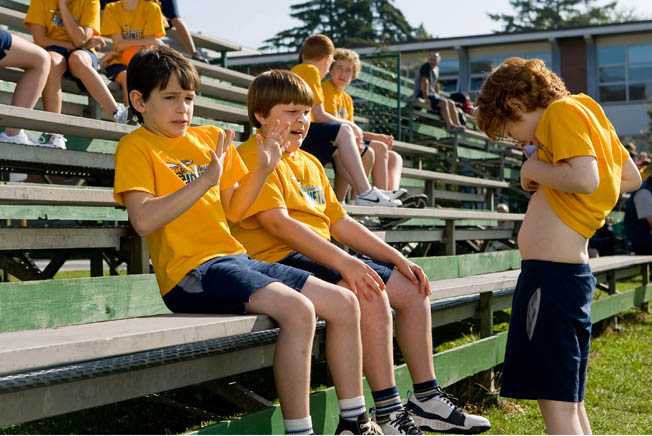 The title “Diary Of A Wimpy Kid” is misleading. Yes, the film is a sort of diary for central character Greg Heffley, but the term “wimpy kid” doesn’t fit his character. “Wimpy” isn’t this kids main problem; he’s a selfish jerk – a nerd in denial that ready to sacrifice his overweight one-and-only friend, Rowley, to the Socially Awkward And Chronically Friendless Gods for a shot at popularity. The movie should be titled “Diary Of A Prick Kid.” You don’t care one bit for his character. And if you there was a kid like him at your school, you would have steered clear of him. There is a reason that nobody but the fat kid and the hygienically disgusting kid want to be around him.

Diary Of A Wimpy Kid opens with underdeveloped Greg getting ready for his dreaded first day of middle school. One area in which the movie succeeds is in its perfect portrayal of that terrifying time of a one’s life – entering a new school, social cliques, hitting puberty (or watching everyone else go through it before you), striving to fit it, etc. Watching these scenarios unfold will make you vividly flash back to those days, thanking the stars that they’re long gone.

At the same time, for boys, Diary Of A Wimpy Kid also makes you relive the fun shenanigans that you’re no longer able to get away with. Sporadically throughout the movie, you’ll be taken back to your own childhood as you watch Greg and Rowley do the exact same crazy things you did as a kid.

But don’t be fooled. Just because there are a few positive things about the movie it doesn’t mean it is worth seeing. Unfortunately, because the movie is made for kids around the same age as its characters, adults will get extremely bored. Since we’re seeing Greg’s diary visualized, often times things look absurd, characters are over-the-top and irrational. Being episodic and not having one constantly progressing story, Diary Of A Wimpy Kid feels exceptionally long. The punk lead character isn’t the only thing to get on your nerves; it’s chock-full of repetitive bathroom humor. How many snot and pee jokes can they cram into one kids movie?
Diary Of A Wimpy Kid is a perfect movie made for kids – boys in specific – around the same age range as its characters – 11 to 15 (ish). It’s guaranteed to keep them entertained. They will love it. But if you’re not in that age group, definitely consider seeing something else.