Or as I like to call it, “How 9/11 got between me and my boyfriend” Made for fans of Nicholas Sparks, bad romance flicks and even worse – trash romance novels 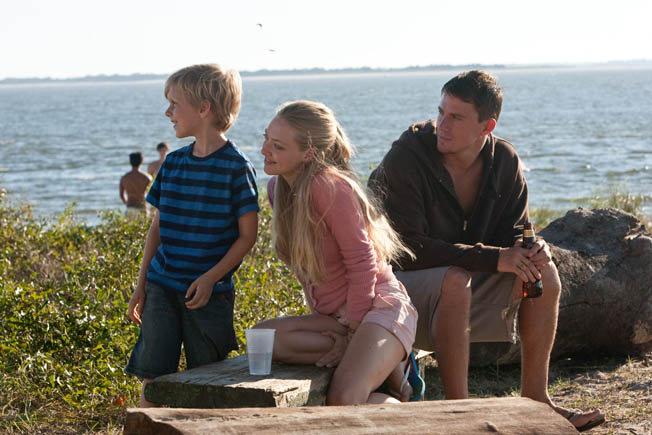 There’s nothing wrong with a good chick flick – but there is definitely something wrong with a bad one. What classifies one as being bad? No chemistry between the two lovers, unbelievability in the situations and decisions the characters make, boring actors, typical plot lines, etc. Dear John features every single one of the mentioned characteristics of a bad chick flick.

It’s the end of the summer of 2000. John (Channing Tatum, G.I. Joe: Rise Of The Cobra) is standing on pier. He’s a surfer with a board, so what he’s doing up there and not in the water boggles mind. Savannah is standing on the same pier with her friends when one of them clumsily knocks her purse over the railing. Without thinking twice, John The Stranger dives off to retrieve it from the ocean floor. For the next two weeks, Savannah and John spend every moment of their moral lives together.

You see, Savannah and John both have other obligations to attend to in their lives. Savannah is a student home for summer and John is a Special Forces soldier on leave. Once the two weeks are up, he’ll be back in Iraq for a one-year tour – after which his duty as a soldier will be over.

Being “so in love with each other” after only two weeks – which I don’t buy – John and Savannah begin writing letters back and forth. Nothing important happens, we read some of their letters during montages of Savannah sitting in packed stadium-seating classrooms and John in clichéd military moments from bad made-for-TV war movies. But just one day before his enlistment is up, the terrorist attacks of Sept. 11, 2001 happen. Not wanting to break apart his until, John decides to reenlist for another four years and leave Savannah behind. Sniffle sniffle.

As if Dear John was boring enough before this point, from here out it’s even more boring. Savannah makes decisions out of pity instead of following the her own wants and desires. And in the end, John makes unbelievable and wasted sacrifices on Savannah and her pitiful decisions. In reality, the most interesting storyline in Dear John is a subplot involving John’s autistic father – which isn’t even necessary to the plot.

Amanda Seyfried (Big Love) is a decent actress, but can’t carry a movie to save her life. Anyone who saw Jennifer’s Body knows that. And Channing Tatum is one of the worst, emotionless young actors out there – not to mention that fact that he mumbles every line to the point that he sounds like Rocky Balboa after a major fight. Why he gets leading screentime is beyond me.

When all is said and done, Dear John fells more like Army propaganda than it does a romantic drama. The supposed “romance” between the two leads feels forced, not natural. The dialogue is laughable. And the soundtrack that should be used to heighten (a.k.a. manipulate) you into an intensified emotional state is repetitive and distracting. With just one week left before Feb. 14, there’s only one last hope for a decent Valentine’s date flick – Valentine’s Day; No matter what, it’s got to be better than Dear John and When In Rome combined.