Opening amidst the summer giants, "Cyrus" dishes up more quality entertainment than its competition. Made for fans of intelligent, thought-out, indie romantic comedies.

Rated R for language and some sexual material. 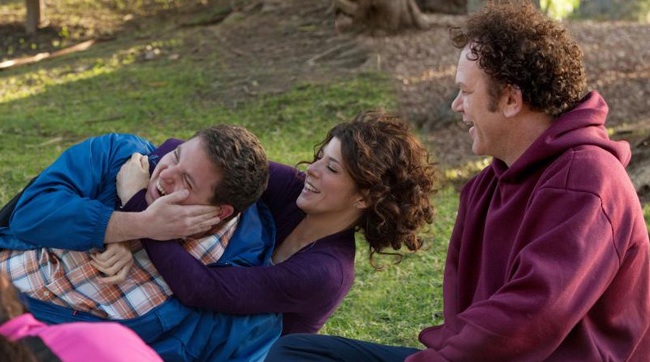 Through and through, Cyrus is an indie film. The story, the plot, the characters, the dialogue, the direction – it all emanates the successful achievements of independent filmmaking. You don’t have to have a major studio backing you nor a blockbuster script backed by millions and millions of dollars to get outstanding well-known actors to star in your movie. All it takes is an honest piece of work. Such is the case with Cyrus.

Ever since his wife Jaime (Catherine Keener, Into The Wild) left and divorced him, John (John C. Reilly, Talladega Nights) has been in a rut. Because his job freelance editing rarely requires him to leave the house, he has become a socially awkward hermit of sorts. And the fact that his ex-wife is his only friend, showing genuine concern for his well-being, doesn’t help his situation much.

Jaime is engaged and is now even more worried for John than she has been since they were married. Trying to get him to break out of his shell, Jaime and her new fiancée invite John to accompany them to a party full of intellectual yuppies. Because John is an overly open and honest guy who wears his emotions on his sleeve, watching him try to pick up on women at the party is like a train wreck that you don’t want to watch, yet can’t peel your eyes away from. Without fail, he crashes and burns each time.

Drunkenly staggering out to catch some fresh air, John meets the one girl who actually finds his vulnerability and awkward honesty refreshingly charming – Molly (Marisa Tomei, My Cousin Vinny). After romantically spending the rest of the evening together, Molly disappears without giving John notice or reason.

The next night, John and Molly get together again. And once again, Molly splits in the middle of the night. But this time John’s curiosity gets the best of him and, like a stalker, he follows her to home with the headlights off and falls asleep in his car outside her house.

When John rises the next morning, thinking nobody is home, he becomes even more stalkerish and begins peering into the windows and over the fence of her home and yard. Out comes Cyrus (Jonah Hill, Get Him To The Greek), the 21-year-old home-schooled son that Molly failed to mention. If you thought John was capable of creative awkward tension, you haven’t met Cyrus yet. He is more protective of his mother than a father is of his first-born daughter. Making progress in the relationship with Molly is child’s play compared to the battle John faces with Cyrus.

Although Cyrus may sound like the typical Judd Apatow-ish comedy in which both John C. Reilly and Jonah Hill would both star and spout out improvised line after line, it is far from it. Cyrus is intelligent and heartfelt. The bold editing uses a rare technique that allows you to bask in the pure emotion of the story, giving off nothing less than an honest, memorable tone. The comedy isn’t forced and the laughs come naturally, more often deriving from situational humor than punch lines and gags.

The performances by the three leads are all noteworthy. Reilly is always fun to watch in comedies because before he was in comedies, he was an amazing Oscar-nominated actor known for playing serious roles. The guy can act! To see a “real” actor tackle comedy is far more interesting than watching a comedic actor do the same thing you always see him or her do.

When Jonah Hill is playing a role in a well-scripted, un-improvised film, his true acting abilities come out. Hill as Cyrus is easily his best performance to date. Watching him will make you want to see him do more inspiring films like this.

And who doesn’t love Marisa Tomei! She is the actress that you always think of fondly when her name comes up, but the second you see her on screen again, you fall in love with her. Now in her mid-40s, no matter how much older she gets, she will always charm you into falling for her. It’s no wonder why Mickey Rourke fell for her as a stripper in The Wrestler.

If Cyrus is playing anywhere near you, go see it. It is one of those small gems that rarely come along. It may take extra effort for you to see it, but it is definitely worth it.