Never tries to reinvent the wheel, but provides enough thrills to warrant a weekend out. Made for forgiving horror fans looking to have some fun. 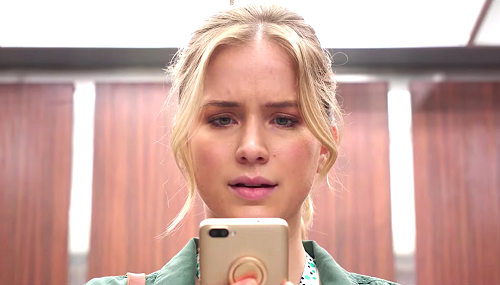 Put enough jump scares in a horror movie and I’ll jump at least once. Surprisingly, writer/director Justin Dec doesn’t rely on them as much as you’d think. A good thing too, because Countdown has more going for it than the average horror flick. Sure it has dopey moments, but it also has plenty of spirit to keep the story interesting. Think Final Destination with an app — minus all the Rube Goldberg machinations. That description alone should make or break your decision. But with Countdown being the only horror movie released this month, it won’t be a waste of money for interested parties.

Like many horror movies, events kick off at a high school party where a group of drunk friends download the “Countdown” app which tells them exactly how long they have to live. For poor Courtney (Anne Winters), her time left shows just few hours which comes true in spite of breaking the user agreement after refusing a ride home from her drunk boyfriend, Evan (Dillon Lane).

Of course Courtney winds up dead and Evan gets in a car wreck with a tree branch sticking through the passenger seat. Before surgery, Evan meets newly-certified RN Quinn (Elizabeth Lail), who decides to download the app against her better judgement. Sure enough, she’s down to her final days and enlists the help of fellow app user Matt (Jordan Calloway), to find out what’s behind the app and save their — and Quinn’s sister Jordan’s (Talitha Eliana Bateman) — fates.

When a horror movie isn’t taking itself completely seriously it usually works best. Especially with slasher films. While there may not be an actual slasher on the loose, Countdown plays by the same rules. While Final Destination may be one of its biggest inspirations, it also owes a lot to Happy Death Day with a final girl not willing to play by the rules. Yes, the characters still do some pretty dumb stuff, but they also do some smart stuff. For every strange noise investigation there are also plenty of scenes like Quinn using Evan’s dead body to unlock his phone. Dec also gets a kick out of not skimping on some decent gross-out gags and going full steam ahead with his demonic ending.

With Halloween less than a week away, it’s always disheartening when studios fail audiences with only one offering. While It: Chapter 2 is still floating around in theaters — and families have The Addams Family — at least there’s Countdown. It may not reinvent the wheel, but it does have fun playing with conventions. Lail makes for a great final girl with girl power to spare —  and it’s nice to have a horror movie not filled with annoying fodder you want to see die — making Countdown just good enough for a weekend full of tricks and treats.