Never eclipses the original classic, but makes for a great reunion of beloved '80s characters. Made for Murphy's superfans and anyone looking for an amusing time waster. 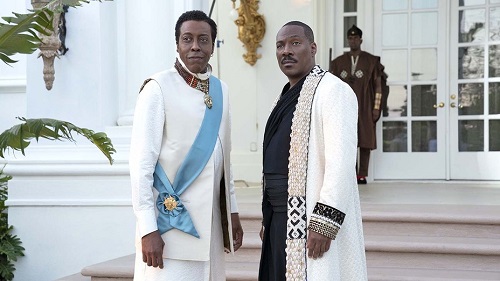 It’s taken 33 years for Eddie Murphy’s classic Coming to America to receive a sequel. It’s also taken 33 years for me to see it — much to just about all of my friends’ chagrin. How could I possibly have not seen one of the most popular movies not just of Murphy’s, but of the ’80s? Let’s be honest, not everyone can possibly see every movie ever released, right? With an advance screener for Coming 2 America sitting in my inbox, I hit Amazon Prime to play catchup.

And what a delight! Full of nothing but charm, charisma, and female empowerment — a huge rarity when it comes to male-lead ’80s comedies. So does the sequel live up to the original? Frankly put, this basically is the original, but with just enough modern updates from co-writer Kenya Barris to make sure it never tarnishes the original.

Prince Akeem Joffer (Murphy) is now King of Zamunda and has been living the last 30 years of bliss with his Queen, Lisa (Shari Headley). Together they rule Zamunda and have been bringing up three Princesses: Meeka (KiKi Layne), Omma (Bella Murphy), and Tinashe (Akiley Love). Unfortunately, they are awaiting the passing of King Jaffe (James Earl Jones) who has informed Akeem that he has an estranged son, Lavelle (Jermaine Fowler), whom he must bring back from New York to wed the daughter of General Izzi (Wesley Snipes), the leader of Nextdoria to keep the peace between the two countries.

Watching the two Coming films practically back-to-back shows just how much is largely a repeat. The original’s writers (Barry Blaustein and David Sheffield) are probably credited due to large sections of this being almost word-for-word. Coming 2 America will feel fresher if you don’t revisit the original. It’s crazy how many of the original cast are back, right down to Louie Anderson reprising his role as a McDowell’s employee, conveniently relocated to Zumunda for optimal cameo convenience. And they’re obviously very happy to be back together again.

The new cast members do what they can to fit in. Leave it to Leslie Jones, Tracy Morgan, and Snipes to try to steal the show with every scene. Unfortunately, Fowler leaves a lot to be desired. He’s likeable enough, even if Lavelle’s plot comes with a very clear blueprint, but Akeem’s daughters manage to hold their own better. Layne in particular, whose Meeka can’t help but follow in her father’s footsteps, looking for ways to keep her beloved country moving forward with the changing times.

There’s also a huge number of cameos sprinkled throughout, and another hilarious reference to Trading Places. Thankfully, Murphy was smart enough to cut a cameo sequence featuring the Klumps. All Murphy clearly wants to do is revel in his glory days and for some it will be more than enough. For those who haven’t seen the original, it will work far better if you keep it that way. For everyone else, it’s time for another royal party with the Jaffes and it’s included with your Prime subscription.