Knight has basically rebooted the franchise and proves what we knew all along: Bay had to go! Made for Transformers fans and those who have lost hope in Michael Bay's bloated franchise. 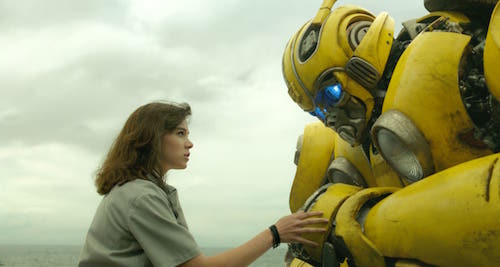 It only took six films to make clear exactly what was wrong with the Transformers films: Michael Bay. Not that anyone didn’t know this, but with new director Travis Knight in place for Bumblebee, sixth time’s the charm! The first Transformers was a decent start, but it hasn’t aged particularly well, and all four sequels have been nothing but an embarrassment. Yet audiences still turned out in droves. Fans have waited 11 years for a good sequel, and just wouldn’t you know it, Bumblebee isn’t only the best entry, period, it’s also a prequel! Hopefully this means the franchise is secretly starting over and they can continue to move forward with a new timeline full of the Transformers goodness we deserve.

A war is raging on Cybertron between the Autobots and Decepticons forcing Optimus Prime (voiced by Peter Cullen) to order an evacuation, sending B-127/B (voiced by Dylan O’Brien) to Earth. His mission: to set up a base of operations for the Autobots to regroup in safety. B crashlands in the middle of a Sector 7 (a secret government group monitoring extraterrestrial activity) training exercise with the Decepticon Blitzwing — and lieutenant Jack Burns (John Cena) — hot on his tail. After Blitzwing destroys B’s voicebox and erases his memory core, B transforms into a 1967 Volkswagen Beetle and escapes.

Eventually, Charlie Watson (Hailee Steinfeld) finds B in a scrapyard and is given the Beetle as a present for her 18th birthday under the condition she can get it to start. Now, Charlie finally has a car — much to the chagrin of her hilariously overbearing mother Sally (Pamela Adlon) — and winds up getting more than she bargained for after she finds out her car is really a robot in disguise. Speaking only in hums and buzzes, Charlie names him Bumblebee and soon enough, the whole word is at stake after Charlie accidentally releases a homing signal sending Decepticons Shatter (voiced by Angela Bassett) and Dropkick (voiced by Justin Theroux) on their own mission, posing as peacekeepers, to convince Sector 7 into helping them find Bumblebee and end the Autobots once and for all.

While it may sound like Bumblebee is a tad convoluted, it’s absolutely not. It’s a straightforward coming of age tale, Amblin-style, that happens to have Transformers in it rather than say, E.T. Steinfeld carries the weight of the film on her shoulders fantastically, helped out by a motley crew of hilarious side characters. Cena is perfectly cast as the only government employee who seems to see the reality of the situation. Jorge Lendeborg Jr. provides a pseudo-love interest/sidekick as Memo. Adlon proves she’s always hilarious and not just when starring in her own TV show. And even Jason Drucker and Stephen Schneider, as Charlie’s younger brother Otis and stepfather Ron, get plenty of their own laughs.

But this is all out the Charlie and Bumblebee show, and that’s exactly why Bumblebee succeeds so well. Christina Hodson’s screenplay is surprisingly witty, and even emotional. She knows we may be here for the action, but we also need to care about Charlie, and most of all, Bumblebee’s plight. Michael Bay was completely content with pummeling the audience with grossly filmed/edited action sequences to the point of nausea — Age of Extinction will always be remembered as the Transformers entry that made a colleague puke from it’s so-called camerawork — but Knight knows how to choreograph/film an action scene with the best of them. Enrique Chediak offers up some stellar cinematography. You’d never know this was Knight’s first live-action film, but being President & CEO of Laika Entertainment has paid off admirously.

Bumblebee is one of the biggest surprises of the year and is non-stop fun for the biggest Transformers fans to the biggest skeptics. Full of breathtaking action sequences, huge laughs, and plenty of heart to spare, Bumblebee is another fantastic outing for audiences this season in a very crowded holiday marketplace. It’s too bad Aquaman will be hogging all the IMAX screens because Bumblebee also deserves to be seen on the biggest screen possible. That said, be sure your theater is projecting it in the right aspect ratio. The theater I saw it in projected it incorrectly and caused us to only see about half the film. Lots of headless dialogue ensued. A travesty considering how great it looked while not even seeing the whole screen.

Also worth noting, there is one extra scene at the beginning of the end credits, but nothing after.