Blisteringly funny with plenty of charm and heart to spare. Made for anyone looking to laugh and have their heartstrings pulled.

Rated R for strong sexual content, language throughout and some drug use. 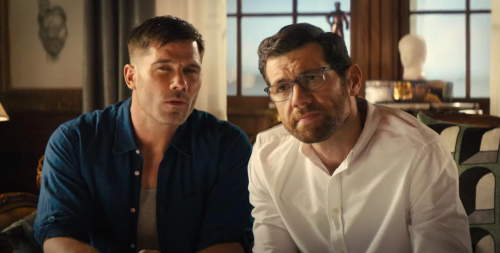 Nicholas Stoller struck cinematic gold with Forgetting Sarah Marshall: a perfect romantic-comedy. While lightning may not have struck twice with The Five-Year Engagement, Stoller more than makes up for it with Bros. Joining forces with Billy Eichner, Bros is exactly the kind of romantic-comedy we all deserve, even as it sets its cynically razor sharp sights on them with their equally hilarious, and heartugging, script. For anyone thinking you can’t make a good romantic-comedy in the technical age, Bros proves there’s still plenty of life in the genre, while also managing to tear them down from the inside out.

Bobby (Eichner) loves being single and his podcast, leaving him with just enough time for Grindr flings and his passion project: to open the first LBGTQ+ history museum. But wouldn’t he know it, someone has come along to make him rethink his stance on love and whether “love is love is love” is the BS he’s always thought. For Bobby, this comes in the form of Aaron (Luke Macfarlane), whom he’s warned by his friends to be as boring as he is good looking. Now, Bobby finds himself in a whirlwind romance, full of all the requisite ups and downs he hate-watches in his nightly “Hallheart Channel” chick flicks, whether he likes it or not.

Bros plays fast and furious with the jokes, aiming for an amazing almost-spoof like tone. Stoller and Eichner don’t just set their jabs at the straight crowd either, there are even more jokes aimed at the gay scene. There’s also cameos galore, so make sure you stay away from IMDB. Eichner is obviously playing a version of himself, but he’s just so damn lovable, no matter how barbed his tongue may get. There’s even a chance Bros could — and should — get a Best Song nomination come Oscar time. Bros is hands down the funniest — and one of the best — films of the year, blisteringly funny and oozing heart. And just like any good Hallheart Channel flick, some of you may want to make sure to have your tissues handy.