Wa wa wee wa! As scathing as ever with an extra dash of heart to boot! Very nice! Made for fans of the original, fans of the character, fans of democracy. 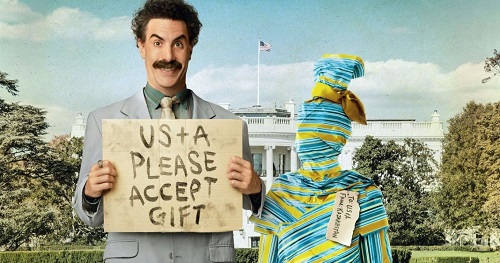 Jak się masz? It’s been 14 years since the last exploits of our favorite intrepid Kazakhstan reporter, Borat Sagdiyev (Sacha Baron Cohen), but the last seven months since reviewing a film has felt even longer for me. Is it coincidence that the last film I reviewed — The Hunt — was also “controversial,” or is it the quarantine talking? Regardless, it’s nice to be back in the swing of things, even if for potentially one film.

I’ve stuck to a strict “no theatrical release” strategy to make sure I didn’t provoke readers to purvey in any activities that may encourage putting themselves at risk. So when screeners were offered for Borat Subsequent Moviefilm — an Amazon Studios release — I jumped at the chance to see if Sacha Baron Cohen could capture lightning in a bottle twice and throw the spotlight on America’s favorite pastimes — bigotry and hatred.

The short answer is: absolutely!

We catch up with Borat working hard labor in a gulag, and banned from reporting, after Kazakhstan became a laughing stock from the release of his last film in U.S. and A. Borat is now offered a chance to not only redeem himself, but also his country, by traveling back to the States and present Vice Premiere Mikhael Pence an offer he can’t refuse. Unfortunately, Borat’s only daughter — 15-year-old Tutar aka Sandra Jessica Parker Sagdiyev (brazenly played by Maria Bakalova) — finds a way to smuggle herself along for the ride, possibly eating their offering to Pence. Borat and Sandra Jessica Parker must ante up an even more substantial offering, setting his eyes on an even bigger prize, amidst Trump rallies, the COVID pandemic, and lockdowns.

For anyone who may have felt Cohen’s Borat was offensive and politically incorrect back in 2006, it may be even more so now. With the Borat character having learned no life lessons from his previous misadventures, Cohen and company — featuring eight credited writers, including Cohen — must have realized while they were dead set on delivering most of the same, there needed to be an excuse for the movie. And what better excuse than to bask in the layer of peeled-back Trumpers? While the current White House occupant might never make an appearance himself, there are plenty of barbs. Some are of the easy variety, but thankfully they get spread few and far between.

For those not searching for news, there are two key enablers to Trump’s fodder who wind up heavily involved. By now, it’s fairly certainly most have caught wind of Borat dressing up as Trump to deliver his gift to Pence at this year’s CPAC, but it’s Rudy Giuliani making all the headlines. There’s some judicious editing in play during the sequence and at first glance it could almost look innocent, but let’s face it, no one within Trump’s reach should ever be given the benefit of the doubt.

For fans of the first Borat, you will love Subsequent Moviefilm. The fact that we get a fresh new movie in the midst of so many productions being shut down, shuffled around, or permanently on hold, it’s amazing they were able to pull this off and release it without almost every bean being spilled. It’s also fantastic to see the film dedicated to late Holocaust survivor Judith Dim Evans — shockingly touching for a movie which relies on shock value. She’s probably the only person let in on the joke and you can tell she was even having fun all things considered.

So where does that leave everyone else? If you hate Borat, Cohen, Republican mudslinging, or shock comedy, you’ve probably already planned on staying as far away as possible. For anyone else interested in Borat’s continued shenanigans, it’s very much worth taking the plunge for those with a Prime subscription. It’s also worth at least a rental for those who don’t. Borat Subsequent Moviefilm never tries to raise the stakes too high — probably from the shifting screenplay dynamics due to the dumpster fire that is 2020 — which goes a long way for a comedy sequel that feels more overdue than it deserves. Very nice!