While we wait for the next installment, Ridley Scott has finally started to officially merge 'Prometheus' with 'Alien.' Even if with mixed results. Made for 'Alien' fans. While ecstatic for more Xenomorph action, it still leaves us even more questions than answers. 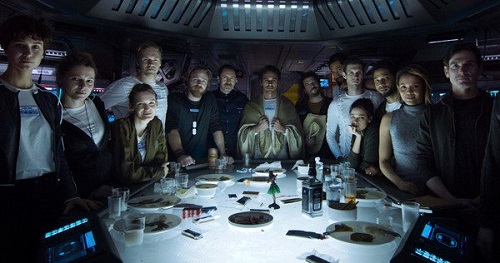 Ridley Scott took an interesting gamble with the release of Prometheus. Instantly divisive, the film was full of huge ideas while surrounding them with some admittedly boneheaded characters. All sci-fi/horror films can be prone to this, so the best approach was ideas first, characters second to get the most enjoyment out of it. With that being said, Scott has taken an even bigger gamble by slapping the official Alien title upon Alien: Covenant.

Beginning with a prologue featuring our new favorite synthetic David (Michael Fassbender) waxing poetic with his creator, Peter Weyland (Guy Pearce), we skip to the year 2104. A colony ship — the Covenant — is headed to a remote planet when a solar shockwave awakens the crew. Forty-seven colonists wind up dead, along with the Captain, Branson (James Franco). Among the crew are Branson’s wife Daniels (Katherine Waterston), the new Captain Oram (Billy Crudup) and wife Karine (Carmen Ejogo), the ship’s pilot Tennessee (Danny McBride) and his wife Faris (Amy Seimetz), along with plenty of other fodder for slaughter. Also on the mission is another synthetic named Walter (also played by Fassbender). A ghost transmission leads them off course to an Earth-like planet where all hell breaks loose as they all soon learn that they are not alone.

To issue a warning upfront, Covenant is way more a Prometheus sequel than it is an Alien prequel. But with Scott having already announced another entry, therein lies the biggest stumbling block: middle child syndrome. All Covenant wants is to find where it fits in and, unfortunately, we’re going to have to wait at least a couple years before we finally find out. As it stands, Scott — and new writers John Logan and Dante Harper — has somehow managed to plant even bigger ideas this time around, even if it only creates more questions than answers. Hopefully, Scott isn’t digging himself into a hole as he tries to marriage the new mythology to the existing Alien universe. The beauty of the original series was it’s simplicity of the xenomorphs picking everyone off one by one. It was the ultimate game of cat and mouse between prey and the hunted. All of this grand backstory is starting to feel even more unnecessary. While it’s amazing to be back in the Alien universe with Scott at the helm, he better find a way to merge the two series together and come up with an epic endgame to make it pay off.

For those of us trusting in Scott’s masterplan — myself included — I say sit back and enjoy the ride. While Alien Covenant may be one of the most predictable — at least as far as tension and scares go — it’s still filled with plenty of reason to go along for the ride. Hopefully, audiences aren’t turned off by the fact that it feels way more Prometheus than Alien so that it can make plenty of money to provide Scott the freedom to take us on another trip. Just because the next entry has been announced doesn’t mean Fox can’t yank it from their slate whenever they want. Covenant may not be the best entry — that claim will undoubtedly always belong to the original — but for now, it’s safe to kick the tires and light the fires.