Super sweet, but super dumb. Made for only hard-pressed families looking for something new with summer behind us.

Rated PG for some action and mild rude humor. 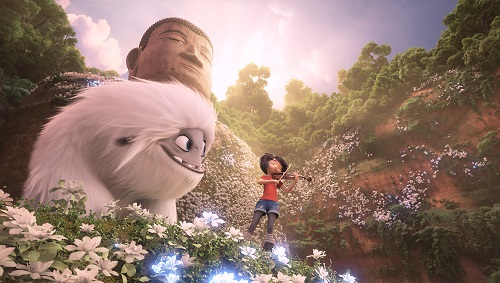 It’s been a bumpy road for Dreamworks Animation since their inception. While their franchises may be a long list of highly-recognized titles, there’s been more than a few missteps. The last two Shrek films were atrocious, and even the How to Train Your Dragon trilogy capper came off as trite and never lived up to the first two.

When it comes to their new co-China production, Abominable, it manages to be both super sweet and super dumb. Writer/director Jill Culton — who ironically cut her teeth at Pixar working on Toy Story, A Bug’s Life, and Monsters, Inc. at different levels — mines simplicity and convenience while adhering to clichéd family film character arcs and conventions.

Teenage Yi (voiced by Chloe Bennet) does what she can to keep herself busy and away from her mom and grandma Nai Nai (voiced by Michelle Wong and Tsai Chin, respectively). One night, a chance encounter with an escaped Yeti on the roof of Yi’s Shanghai apartment building, gives her the chance to head off on the adventure of a lifetime.

Together with her neighbor friends Jin (voiced by Tenzing Norgay Trainor) and Peng (Albert Tsai), the trio embark to take their new furry friend back home to Mount Everest with entrepreneur Burnish (voiced by Eddie Izzard) and his zoologist researcher Dr. Zara (voiced by Sarah Paulson) hot on their tails.

Abominable is prime kid fare. Not to slight youngsters, but there’s just no amount of nuance for adults to get beyond its simplistic nature. A few dumber bits include a villain’s big reveal as they whip off their glasses while shaking their hair out behind them while Peng gets stuck playing Captain Obvious for those not able to keep up with what’s happening onscreen.

And then there’s the Yeti’s magical powers which allow him to use nature to get them out of every tight spot. If they used these powers appropriately, the film wouldn’t even exist. He could have just simply whisked himself back to his mountain top home and the rest of us wouldn’t have had to sit through the movie.

At least Abominable mostly lives up to the visual quality we’ve come to expect from Dreamworks and Rupert Gregson-Williams’ score is quite good, when it’s not being overshadowed by some ridiculous soundtrack choices. Abominable is a harmless time waster that, thankfully, never lives up to its title.