Intense, genuinely frightening, and the most affecting horror movie since 'A Quiet Place.' Made for fans of the original and anyone in need of having their adrenal glands squeezed for 90 minutes. 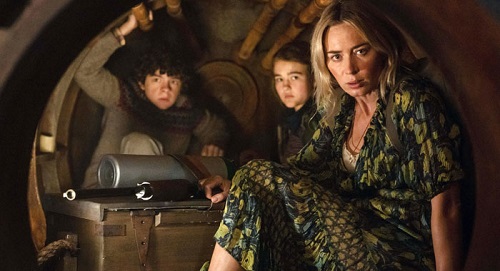 Faced with the ridiculous task of trying to match the brilliance of his own film, leave it to John Krasinski to come in swinging and hit it out of the park. Again. Approached with respectable intimidation, Krasinski said he would only make another A Quiet Place movie if he had a fantastic idea. He did with A Quiet Place Part II. And if recent interviews with wife/co-star Emily Blunt are any indication, we can expect at least one more installment. The best part is that this follow up never suffers from sequelitis. When a film title uses the word “part,” it better be a direct continuation, and boy is it ever!

Day 1: On his way to Marcus’ little league game, Lee (Krasinski) swings by the general store to pick up a few things where he sees a news broadcast about a possible explosion. Back at the game, he swiftly packs up his wife, Evelyn (Blunt), and their other two kids — Regan (Millicent Simmonds) and Beau (Dean Woodward) — when something comes crashing out of the sky. Soon enough, their town is under attack by aliens and everything is thrown into chaos.

Day 474: Evelyn and Regan have just taken down an attacking alien, with the help of Regan’s new homemade hearing aid, and make an escape. Soon, the Abbots wind up taking refuge with their ex-neighbor, Emmett (Cillian Murphy), only to run across a radio broadcast of “Beyond the Sea.” Regan is convinced that it’s a signal and figures out the coordinates, setting out to find out who is behind it, eventually with an apprehensive Emmett tagging along to help keep her safe.

As rare as a perfect sequel may be, it’s a huge sigh of relief to find A Quiet Place Part II living up to the original. I haven’t loved a horror sequel this much since Scream 2. It does exactly what a sequel is supposed to: honor the original, broaden the scope, heighten the scares, raise the body count, and even serve as a possible end point. The less known about the plot, the better, of course. And while there’s already talk of a potential trilogy, I appreciate that Krasinski and Paramount aren’t trying to churn them out as fast as they can.

Expectations have only built waiting for the film’s release. It was one of the first tent pole releases to get pulled last year and I was only about a week out from seeing it when it was canceled. Thankfully, it’s everything I wanted it to be. It’s scary, fun, smart, wickedly paced, and exactly the kind of theater experience we’ve all been craving. There’s even one scene in particular that hits harder while watching with a mask on.

A Quiet Place Part II more than lives up to the original and deserves audiences to come — safely — flocking back. But, those still hesitant, it would totally be worth a Paramount+ subscription in 45 days all on its own.