A Cure for Wellness

Never scary, always boring, but mostly icky. Made for hard-up horror fans only. 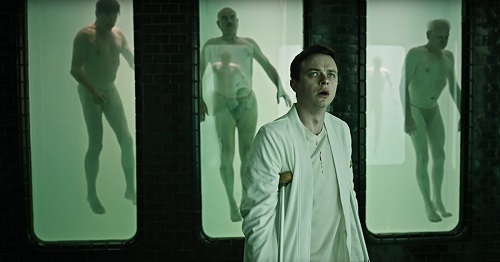 Director Gore Verbinski sure can jump from one genre to another. Showing his eye for hilarious visuals and slapstick with Mousehount, he wasn’t heard from again until the Julia Roberts/Brad Pitt black comedy The Mexican. It was an abrupt shift for the director, but what came next was an even bigger shock: The Ring. One-upping Hideo Nakata’s original, The Ring still stands as one of the scariest films I’ve ever seen. From there he quickly boarded the Pirates of the Caribbean franchise. After jumping ship, he delivered one of his best films after in Rango for Lucasfilm. Cracks began to show in his skills with the gluttony of The Lone Ranger. Now, Verbinski delivers his biggest snoozefest yet with A Cure for Wellness.

Lockhart (Dane DeHaan) is a young executive sent to look for his company’s missing CEO, Pembroke (Harry Groener), after taking a sabbatical at a “wellness center” retreat in the Swiss Alps. Here, Lockhart discovers that the relaxation may not be as natural as it should. Among the possibly sinister staff are the super-odd father/daughter duo Volmer (Jason Isaacs) and Hannah (Mia Goth). Things go from bad to worse as everyone does whatever they can to keep Lockhart from returning home, and eventually, Lockhart discovers Volmer’s true intent behind his clinic.

I was looking forward to A Cure for Wellness seeing how Verbinski certainly proved he can creep audiences out with the best of them after unleashing The Ring remake. Unfortunately, Verbinski is saddled with Justin Haythe’s overindulgent screenplay. At a bloated 146 minutes, had about a half hour been trimmed, he may have had a modern classic on his hands. It’s too bad the script gets so outright icky in the last 15 minutes, and Verbinski seems to forget his subtle shock tactics when he goes for the jugular.

This is just a boring film. Scenes seem to go on forever while serving absolutely no purpose. DeHaan continues to annoy as a lead and Goth isn’t given as much to do as the virginal Hannah as she should. It is all shot rather spectacularly by Bojan Bazelli, but Verbinski’s plodding pace simply makes A Cure for Wellness only a cure for insomnia.