The Boys Are Back

– Three stars (out of four)
– Rated PG-13 for some sexual language and thematic elements.
– Who’s going to like it: anyone willing to go to the Broadway Theatre 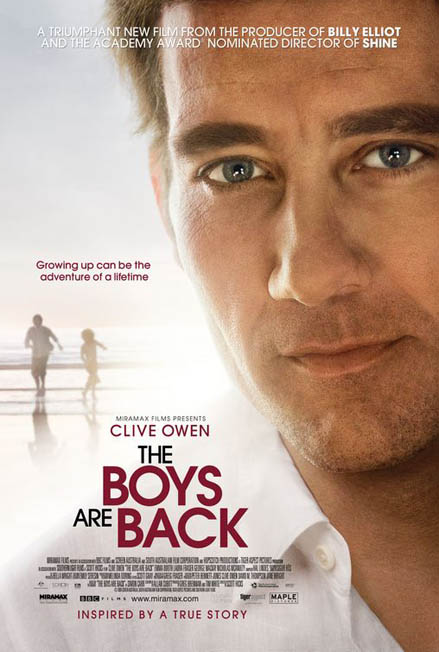 The Boys Are Back tells a far-from-typical story about JoeWarr (Clive Owen, Children Of Men), a recently widowed man not only struggling through his own grief, but with properly raising his now motherless son. And as if things couldn’t get any harder, Joe’s ex-wife pawns off their teenage son on him too. The film takes you on their journey to getting their feet back on the ground.

There’s not much of a plot to The Boys Are Back, but that’s not a bad thing. Instead of feeling like a contrived Hollywood picture, it feels like you’re fly on the wall witnessing this realistic story. Because of the natural feeling of the film, you never get bored – it feels like real life. And it’s from this element that the film can be recognized for such high levels of excellence.

Although the cast is comprised of mostly unknown actors, there’s not a bad performance in it. Owen’s recent action roles haven’t given him much of a chance to prove his acting talent, but he gives nothing less than a brilliant performance here. And every other actor, young or old, matches his genuine charisma, adding a great depth to the picture as a whole. One to watch out for is 17-year-old British actor George MacKay (Defiance), playing Joe’s oldest son Harry. Forgive him for the fact that he looks a lot like Harry Potter‘s Ron Weasley (Rupert Grint).

The Boys Are Back is one of those rare gems that we’re fortunate to have opening here in Utah. Depending on how the rest of the year’s movies play out, don’t be surprised if this is one of the films you see nominated come awards season. Do feel ashamed if you never took the time to see it.