More Than A Game

– Three stars (out of four)
– Rated PG for brief mild language and incidental smoking.
– Who’s going to like it: not only sports fans and LeBron James lovers, but anyone interested in learning how basketball really is “more than a game” 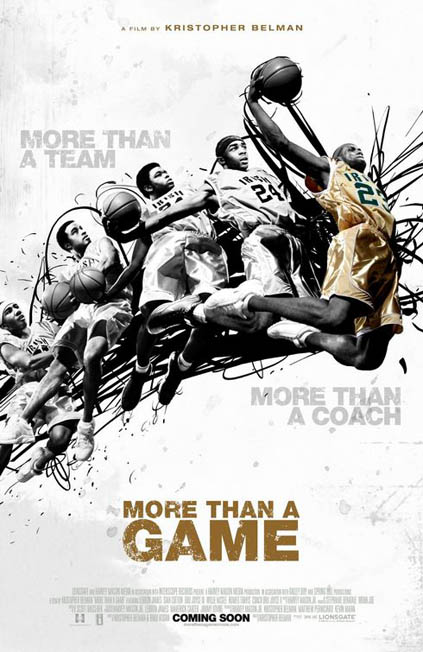 More than just a sports movie

When I was about 18-years-old, a few friends turned me on to the idea that being for California, it was required of me to be a Los Angeles Lakers fan. Since then, I have been. At that time, Kobe Bryant was the latest and hottest addition to the team, so for me he’s one of the best. Imagine how offended I was when there were talks of some new kid coming out of high school being “better than Kobe” and “what Kobe could be if not for his ego.” Because of the trash-talking comparisons, I’ve never liked LeBron James. Until now.

More Than A Game shows the well-documented personal experiences of LeBron James, the “Akron Fab Five” and their coach. Although their defying-the-odds story is well-known to sports fans, it’s their little-known and extremely touching and coming-of-age story that’s shown here – the ups and downs of families, friendships, teammates and basketball. Although More Than A Game tells a story you already may know, it shows what it took those players to get through it. It shows you the type of character you have to be to accomplish such things.

I’m still a Lakers fan and I’ll still root for Kobe one hundred percent of the time, but I’ve got nothing but respect for LeBron. I learned he’s a good, loyal, friendly and happy person with a great big heart. Do I want to see him win a championship? No. But I do want to see him play as hard as he can and go as far as he can.