Harry Potter and the Half-Blood Prince

– Who’s going to like it: Harry Potter fans (especially the teenage ones) and anyone who’s been following and enjoying the movies 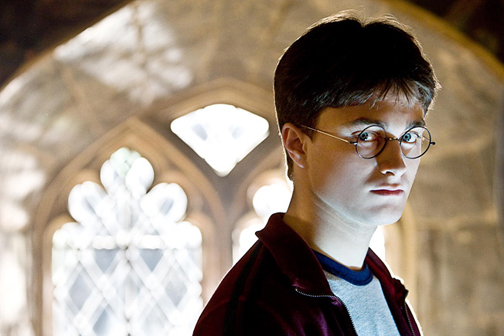 The best Potter movie yet

Disclaimer: If you aren’t up-to-date on the Harry Potter movies, don’t even try seeing The Half-Blood Prince. You must know what’s going on or you’re going to be lost.

While I’m a fan of Harry Potter movies, I’m not fan enough to read the books. I’ve enjoyed the big-screen adaptations and don’t want my views skewed by knowing how much they stray from the novels. The films are not perfect, but they work just fine (most of them, at least). But now, with Harry Potter and the Half-Blood Prince, every beef that I’ve ever had with them is put to sleep. 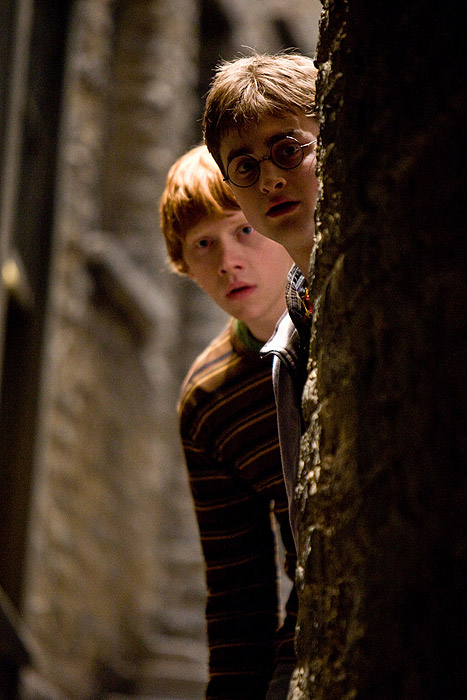 The fourth book, Harry Potter and the Goblet of Fire, directed by Mike Newell (Mona Lisa Smile), is without a doubt the worst of the films. There’s no fluidity. The main characters never come across as being real friends, especially considering how few scenes they appear in together. I’ve actually vowed to never watch that chapter again because of how poorly directed it is. I guess that’s what they get for hiring the director of Mona Lisa Smile to direct the first PG-13 Potter flick. The fifth film, Harry Potter and the Order of the Phoenix, directed by little-known British television director David Yates, redeemed the wrongs from Goblet of Fire and brought the life back into the series. Apparently, Warner Bros. liked him so much that they contracted him to direct the latest installment, Harry Potter and the Half-Blood Prince, as well as the the final book’s adaptation, Harry Potter and the Deathly Hallows – which is being split into two films. The first half of the Deathly Hollows will open in theaters in late 2010, with the second half opening summer of 2011. 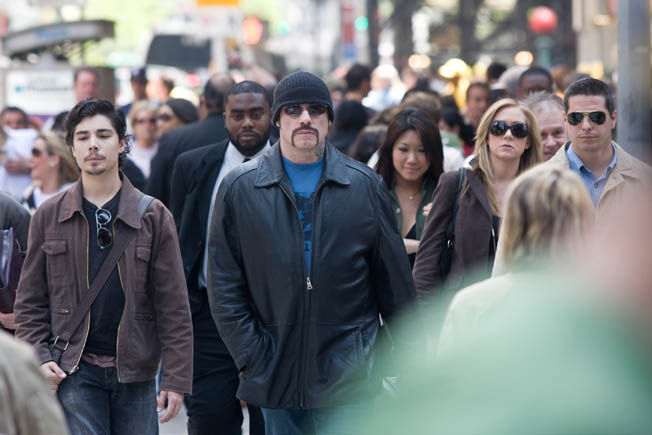 Harry Potter and the Half-Blood Prince is more of a character story than anything else. Everyone is on a mission. Professor Dumbledore (Michael Gambon) – who is secretly performing his own missions – has charged Harry (Daniel Radcliffe) with earning the trust and uncovering secrets from the school’s new Potion Master, Professor Horace Slughorn (Jim Broadbent, Inkheart). The truths he uncovers send him to complete the most dangerous we’ve seen Harry perform yet. Draco Malfoy (Tom Felton) has been commanded of Voldemort to perform a secret task, one which we suspect but aren’t completely sure of. Professor Snape (Alan Rickman, Sweeney Todd) has entered into an “unbreakable vow” to help Malfoy accomplish this task. 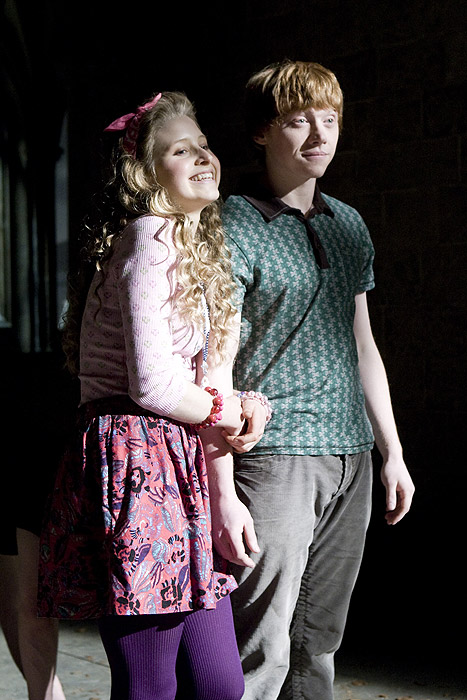 While all of this is going on, a teen love story of epic hormonal proportions is going on between the sixth-year students of Hogwarts. Harry’s inner feelings for Ginny Weasley (Bonnie Wright) – who’s already dating someone else – are becoming visible to others. Hermione (Emma Watson) is struggling with getting the attention of Ron (Rupert Grint) while Ron’s out “snogging” a cute-but-crazy bimbo. Even though there’s a large amount of teen romance, which should be a bad thing, it’s perfect for the film. It creates a light-hearted environment which opens the door for lots of laughs and also allows us to see these young adult actors actually act. We finally get these characters flushed out, which has been one of my problems with the films until now. And that’s not the only of my qualms that Half-Blood Prince puts to rest.

All along, I’ve felt like the Harry Potter films have lacked several things to make them feel more epic in nature. Fluidity – each film has been it’s own stand-alone story. Harry is home for summer, he goes to Hogwarts, something bad happens, he overcomes it, and goes back home. The end. And each film does that over and over again. Finally, with The Half-Blood Prince, they have changed that. Half-Blood Prince opens with a brief scene picking up right where Order of the Phoenix left off. It re-establishes that somber tone and sets the mood for the entire film in that minute-long scene. It makes a big difference. In the opening, when the theater should be full of screams and cheers of die-hard fans, it’s quickly and noticably silenced by the heavy intro. 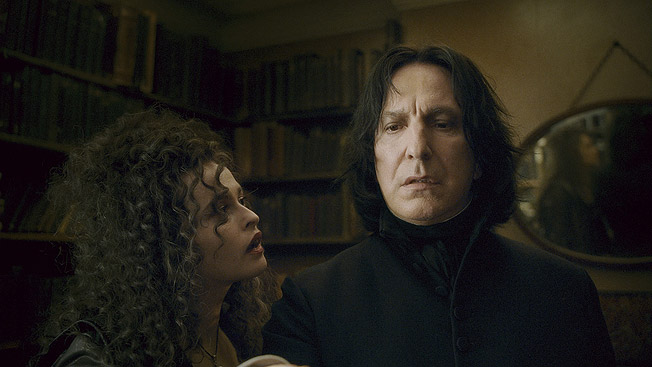 I’ve never felt like these kids have had any real danger upon them. Even in the Order of the Phoenix when the kids are running from the Death Eaters in the corridors of the Ministry of Magic, it never felt like they were in danger. There were Death Eaters flying next to them, yet the Death Eaters would never attack. They didn’t pose a threat. Give us some tension here. Thank heaven that for the first time, watching The Half-Blood Prince, you’ll think to yourself, “It’s on. The war has begun. No body or place is safe.”

There are two scenes in Harry Potter and the Half-Blood Prince that were made-up just for the film. The book fans can complain all they want, but these two scenes emphasize that idea that “it’s on.” Things will never be the same. Neither the world of magic nor the muggle (human) world are safe. The stakes have been raised. People are going to die.

While The Half-Blood Prince is rated PG, it’s should probably be PG-13. It’s just as dark and intense as the previous Potter films. Many people have asked me, “Can I bring my 8-year-old to see it?” I’ll say this: if your kids have seen the previous Potter flicks, there’s no reason why they wouldn’t be able to see this one.

Many people have also asked me, “How true-to-the-book is Half-Blood Prince.” Upon leaving the theaters I’ve heard many people say that this one is the most true to the book. Aside from those two already-mentioned added scenes, there are only two other major changes.

Number one: right before the big shocking moment happens, Snape approaches the hidden Harry and calms him. Number two: the battle between the Death Eaters and the Order of the Phoenix at the end never happens. Instead, they keep the somber tone of the act that just happened. Don’t worry, it works well. 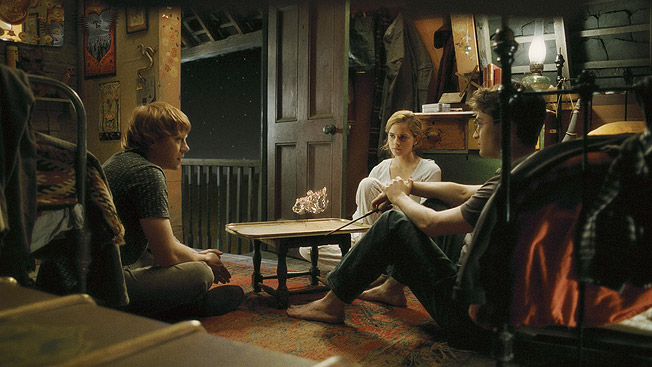 Many people have complained that Half-Blood Prince lacks action and intensity, that nothing happens. Knowing what’s about to happen in the next movies, this is the calm before the storm. Throughout the entire movie, although it’s filled with lots of humor and fun moments, there’s this looming darkness that’s building heavier and stronger right up until the end. I imagine that from the opening scene of the next movie, we’ll be introduced to a new Harry Potter movie – a feeling that we’ve never before experienced. It will be the darkest of them all. The unimaginable will happen. These characters that we’ve been watching since they were tiny, innocent children will suffer. Some will die. 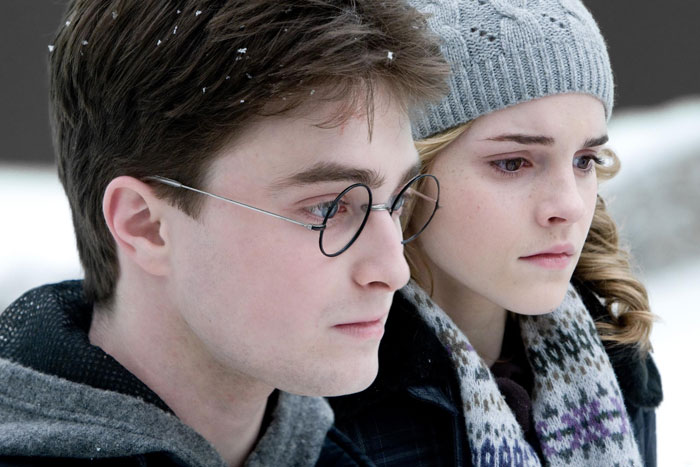