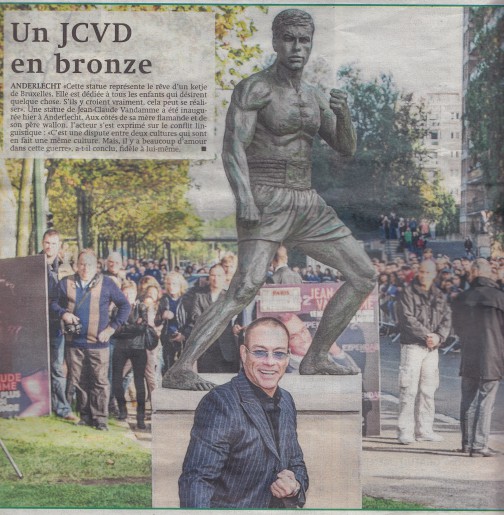 Jean-Claude Van Damme, probably the only Belgian actor everybody knows, visited his home country last week to unveil his statue. The following article (copyright “Metro”) spills the beans. Allow me to translate the French article for the enjoyment of the The Reel Place readers:

“A Bronze JCVD”
Anderlecht (a Brussels municipality) – “This statue represents the dream of a ket (Brussels dialect for “young boy, playful brat”) from Brussels. It’s dedicated to all children with desires. If they really believe, they can accomplish that.” A Jean-Claude Vandamme (typo!) statue was inaugurated yesterday in Anderlecht. Standing next to his Flemish mother and his Walloon father, the actor talked about the linguistic conflict: “It’s a dispute between two cultures that are, in fact, the same. But, there’s a lot of love in this war” he concluded, true to himself.

Regardless of his artistic output (some may say calling him an actor is a stretch), Jean-Claude Van Damme did make it big – and he did it himself. He still has a lot of American fans, and the fifth Universal Soldier movie has been very well received. May he and his French accent rule the sound waves for years to come.