Widens the "Ryanverse" with an intense origin story, while opening up franchise possibilities. Made for Clancy fans, Michael B. Jordan fans, and action-thriller fans. 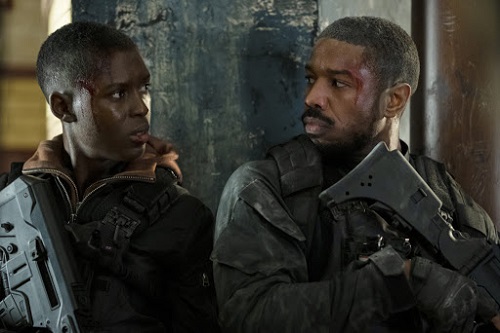 The name John Kelly may be more familiar to die-hard Tom Clancy readers than casual Clancy film fans. But after being previously played by Willem Dafoe and Liev Schreiber, Michael B. Jordan is here to launch the character into his own franchise in Without Remorse. Yes, the “Ryanverse” is finally expanding. While Jack Ryan (played by John Krasinski on the Amazon Prime show) never shows up, it would be quite interesting if either Jordan crossed over into the Amazon Prime series or vice versa. Without Remorse may be an origin story, the same way the novel was. With a quick Wiki check, it appears to be in name only. Clancy fans may balk at the idea, but it makes sense to update the character in order to keep it relevant and ensure maximum franchise potential.

In Syria, a group of US Navy SEALs — including Kelly, Lt. Commander Karen Greer (Jodie Turner-Smith), and CIA officer Robert Ritter (Jamie Bell) — are tasked with extracting a CIA operative who’s been taken hostage. What they find out is the group happens to be ex-Russian military. Months later, retaliation comes calling as members of the extraction team are killed off, with an attack on Kelly putting him in the hospital, leaving his pregnant wife, Pam (Lauren London), and unborn child, murdered. Kelly manages to kill three of the four intruders, then quickly sets off on a roaring rampage of revenge, with Ritter and Secretary of Defense Thomas Clay (Guy Pearce) trying to keep a war from erupting over the leaked news of a Russian attack on U.S. soil.

I don’t have a lot of Clancy reading under my belt, but I have seen most of the movies, and a couple episodes of Amazon’s Jack Ryan series. For those in the same boat, Without Remorse will probably fare best. Even more so for Jordan fans. The man is as electric as ever, bringing his acting skills coupled with his physicality. Director Stefano Sollima stages some great action scenes — some may find them unexpectedly lowkey, but this is not meant to be an over-the-top action spectacle. It’s a revenge thriller, and while you’re probably likely to guess at least one of the final twists, screenwriters Taylor Sheridan and Will Staples keep the plot moving along very briskly.

An underwater sequence is especially squirm-inducing. And one of the longer scenes was filmed on a huge set which helps keep the action easier to watch. It’s also commendable to point out that cinematographer Philippe Rousselot never resorts to shaky-cam. With a less capable actor in the lead, it could have felt more straight-to-video. Turner-Smith is literally one-note, while Pearce plays the same character he usually does, and Bell keeps Ritter always unlikeable and untrustworthy from the first time we see him. Meanwhile, Brett Gelman — mostly known for comedic roles — is wasted with virtually one scene.

For Clancy fans, Jordan fans, or even just every day action fans, there’s plenty to like here and with it premiering on Amazon Prime, the only investment you have to worry about is your time. Without Remorse may not get as political as you’d expect from a Clancy story, but it feels just as timely. There’s also a mid-credit scene so don’t tune out once they start. While it would have been fun to see this on the big screen, considering how well it played on a laptop, it should work even better once it drops on the streaming service this Friday.